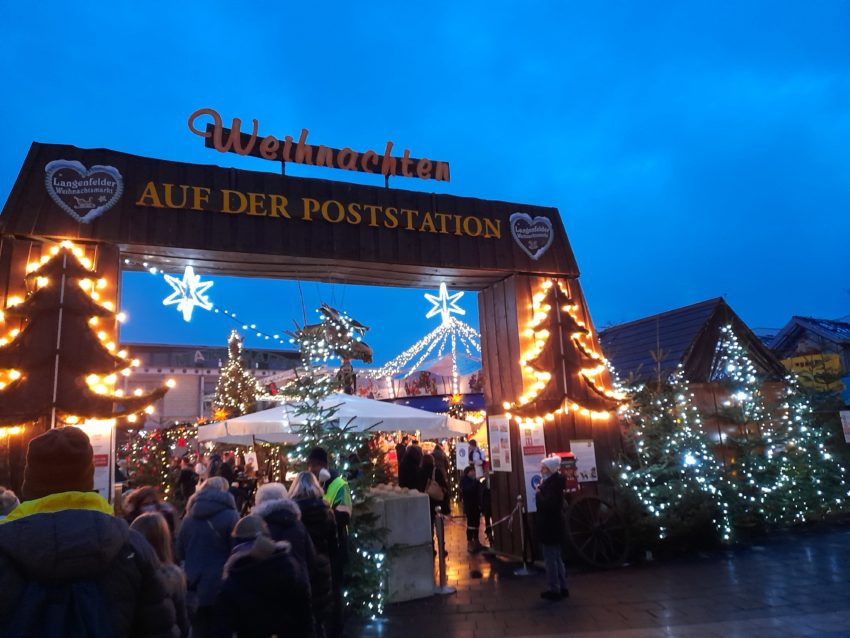 We have the “2G rules” at the Christmas market (“geimpft und genesen,” which means “vaccinated or recovered,” and our immunization status is checked at the entrance with the CovPass-App that makes sure the digital records are not forged). And of course, we’re all wearing our FFP2 masks and keeping social distance. But the German Christmas Market (“Christkindlmarkt” or “Weihnachtsmarkt”) is an important winter tradition, so Lyons Cub and I went today for the first time. It lasts a whole month, until the night before Christmas, and you can find hand crafted items and gifts there, or purchase roasted almonds, popcorn, gingerbread, bratwurst, mulled wine, and lots of other things. There, such as Schwibbogen, and there are also several activities for the kids, like as ice-skating and merry-go-rounds.

To every Christmas Market belongs the Light Festival. The most famous German Light Festival is the one in the city of Essen. I’ve seen it several times as a child, since my grandparents lived there. The little one we went to today is in no way comparable, but for my son, it was a first, and he enjoyed it.

We set out in the dusk, and the lights are most beautiful when it is really dark. That happened on our way home, though. On our way down the street, there were beautiful, sometimes blinking lights (which are called the “Lichterwochen,” weeks of lights). We saw Santa Claus with Rudolf, the Red-Nosed Reindeer, and “Frau Holle” (a benevolent lady from a Grimm’s fairytale who makes it snow on earth when she shakes her pillows). We didn’t have a “let it snow” today, though–it rained lightly 😉

There were also beautiful garlands, and some houses and stores has light chains hanging down from their roofs that looked like ice crystals. We saw lots of lit Christmas trees, stars, and fake presents with nothing in them (but at least, they looked nice, bright red with golden bows).

The Christmas Market had the well-known smell of mulled wine and cigarettes. After my digital immunization records had been checked by two guards at the entrance, we were allowed to go through the gate onto the market. It was a bit crowded and quite difficult to pass through with my son’s push tricycle. He saw the skating rink and really wanted to go ice-skating, but he’s still a bit small for that and not very good on his roller skates yet. Maybe next year! Also, I wouldn’t want to wear those rented skates; we’ll buy our own ones when time comes.

We saw two different nativity scenes that were very beautiful; one was almost life sized. Leander wanted to go on the merry-go-round, of course, and since I had two 2-Euro pieces, he could have two rides. He chose a ship christened, “Maria,” for his first ride.

Lyons Cub’s second ride was a fire-engine for his second one; it had a bell that made a terrible noise when he pulled on a chain. Of course he pulled as long as the ride lasted!!

After the merry-go-round, we went into the festively decorated “city gallery,” our Mall, where he got to ride on his beloved ride-on machines (Bob the Builder and the ice-cream truck), and then, we sat down in the ice-cream parlor and had ice-cream (he chose a turquoise-colored and a pink one). We laughed about the “poop ice-cream” advertised on the menu!

3 thoughts on “… Go to a German Christmas Market?”