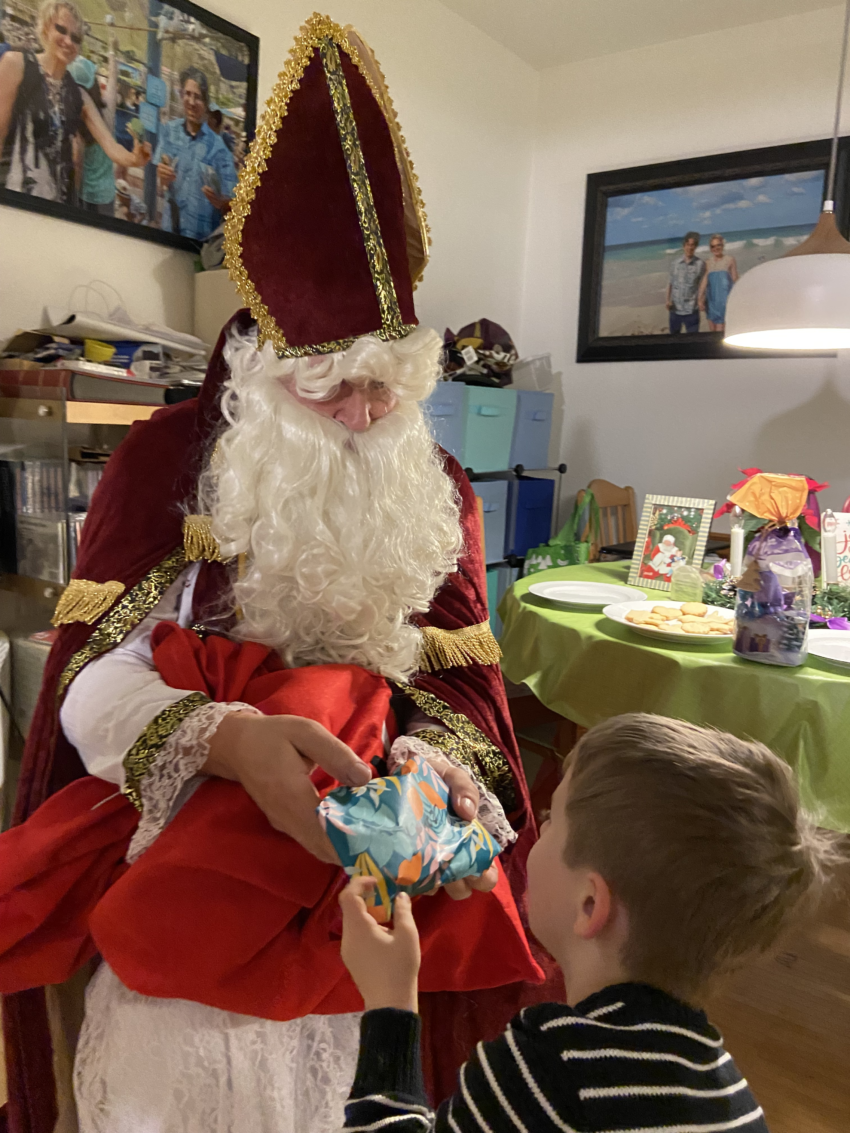 To be honest, I wasn’t sure it would work a second time, but it did. Lyons Cub will be four years old in a month, but he still innocently and sweetly believes in Saint Nicholas and was so excited he came on December 6th! It was his uncle again, wearing the same outfit as last year, when Saint Nick came to distribute presents and admonish the children to be good. My son did not recognize his voice, and he didn’t even notice that the holy man was called “daddy” and even by his name once by other family members by mistake. Oops!

The German Saint Nicholas is not the jolly ho-ho-ho Santa of the United States! He comes earlier (Dec. 6th) than “Father Christmas,” or, in Catholic regions of Germany (where I grew up), “das Christkind,” the “Christ Child,” who comes in the evening of December 24th. And traditionally, Saint Nicholas arrives with a dark, devil-like companion, who brings whips and coals for misbehaving children. I personally have never seen him, though, and neither has my son.

Here, you can see how Lyons Cub opens the door and waits for Saint Nick to come inside. However, when the old man asked where he could sit, Leander offered him the BOOK SHELF!!! Of course, he didn’t fit in it and was satisfied with a big, wooden chair instead. My son wanted to go straight for the goody bag but had to learn that Saint Nicholas read each name of the recipient, and he had to give the gifts to the rightful owner. It can be said with certainty, though, that he got most of them 😉

His older cousins got jewelry and painting supplies, as well as a pottery candle holder and cup from grandma, while Leander received books, a plush toy, light-up shoes, stickers, dino socks, a memory game, and a minion game collection from his Oma. This year, my son was a little worried that Knecht Ruprecht might accompany Saint Nic to bring him black lumps of coal instead of gifts. He knows very well when he has been naughty, and there have been a few nights when he did not want to go to bed and a few middays when he’d rather scream under the table than eat his lunches… Of course, the companion didn’t show, and my son got plenty of goodies and chocolate. He even made a promise to Saint Nick that he would be completely out of diapers by the next time he comes to visit (I certainly do hope so, because he’ll be almost 5 then!!).

This year, Saint Nicholas even played a little with Leander and let him step into his empty sack to have a “Saint Nick robe” himself, too. He was allowed to wear his miter, too! I’m glad we could have this German tradition again this year, especially since the other pre-Christmas holiday, “Saint Martin” on November 11th, had been cancelled for the second time in a row due to corona. (For those who don’t know, Saint Martin is celebrated with a procession of children through the streets at night, carrying their (mostly homemade) lanterns and singing, “Laterne, Laterne, Sonne, Mond und Sterne” (lantern, lantern, son, moon, and stars). If they’re lucky, they get a glimpse of a man riding on a white horse and cutting his warm coat in two to give half of it a beggar on the streets. For the children, Saint Martin throws candy that they catch or pick off the ground. This was an important part of my childhood, and my son has never experienced it yet. Well, maybe next year!!

The adults got a few gifts, too, such as kitchen utensils, socks, cookies, chocolates, and lotion. It was very enjoyable for all, especially to watch the children’s eyes light up. We ate all the Christmas cookies Leander and mommy had baked the day before and snacked on the gingerbread house we had built together.