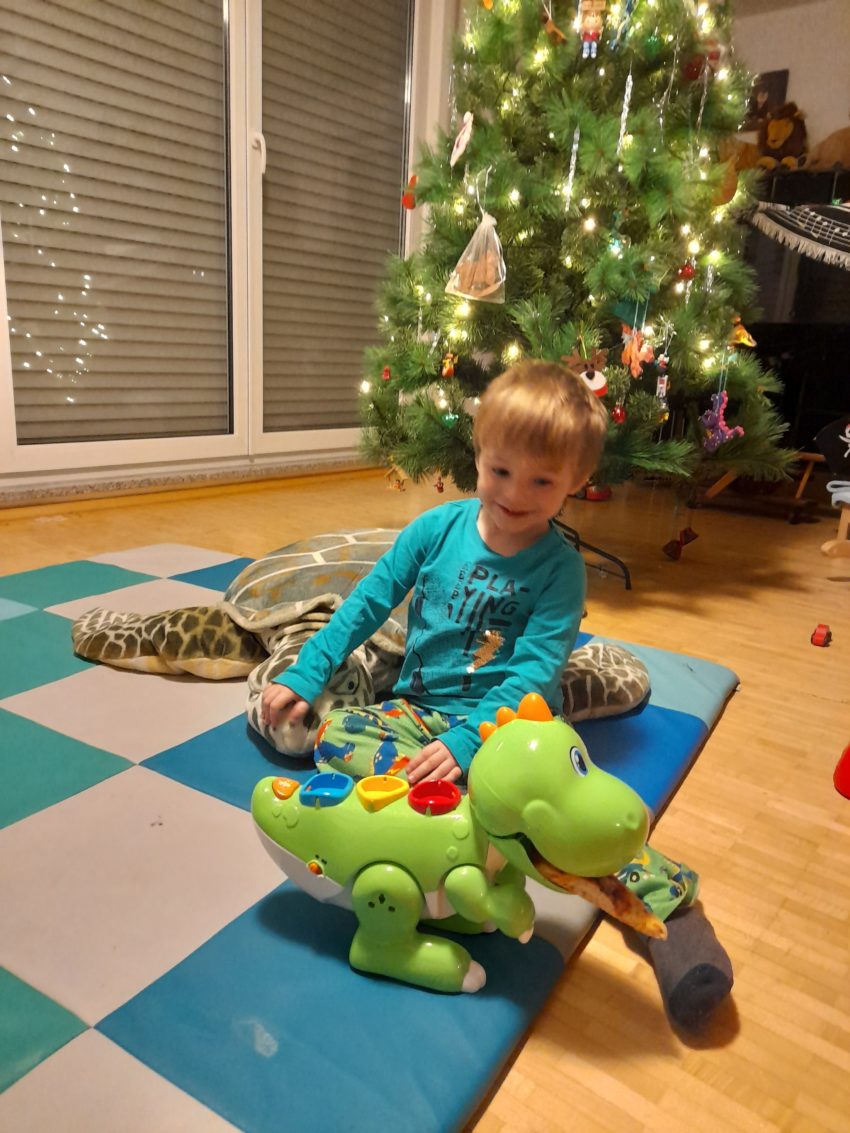 The Mix and Match-a-Saurus from VTech was a big hit with Lyons Cub last Christmas. It comes with a big, orange egg that contains the tiles your kid has to put on its back as crests. Each tile fulfills different tasks; there are motivational and educational sentences and prompts, as well as ballet-like songs, dances, and our favorite: “I am your dino friend, and I want to play with youuuuuuu….!!!” As opposed to other talking toys, this one is not annoying for the parents to listen to, and the voices are high quality and sound like a real kid talking, not like a computer-generated Donald Duck voice.

The movements are quite surprising; it’s like a little robot. Dino cannot only move its arms and legs, but also open its jaws, and as you can see, my son fed it a slice of pizza! It’s also relatively sturdy and survived being sat on by a three-year-old! Dino friend has three settings for “off,” and two different tasks. Also, you can set the sound to “loud” or not so loud, which is great for the parents, especially when junior wants to hear the same song over and over again.

Lyons Cub is a big fan of dino pants, dino sweaters, dino LEGOs (Duplo), and loved his talking dino friend, too. The fact that it is still around a year later to see yet another Christmas celebration speaks for its indestructibility 😉 It’s easy to clean, just in case if you wondered if I got all the pizza out of it again. Here’s my son a year later, at almost four, explaining how to insert the crests. He still loves to dance along with his dino friend!

If you’re still on the fence what to buy your toddler for Christmas, give dino friend a thought! It also exists in pink and purple! Dino friend has 27 possible commands and is intended for 2-5-year-olds. I think up to 4 is ideal; my son definitely can do more with it now task wise, but interacted with his green walking friend the most when he had just turned three. It became his constant companion for a while, participating in eating and napping. And the head is so smooth and round and has such a friendly grin that you simply have to pet it!