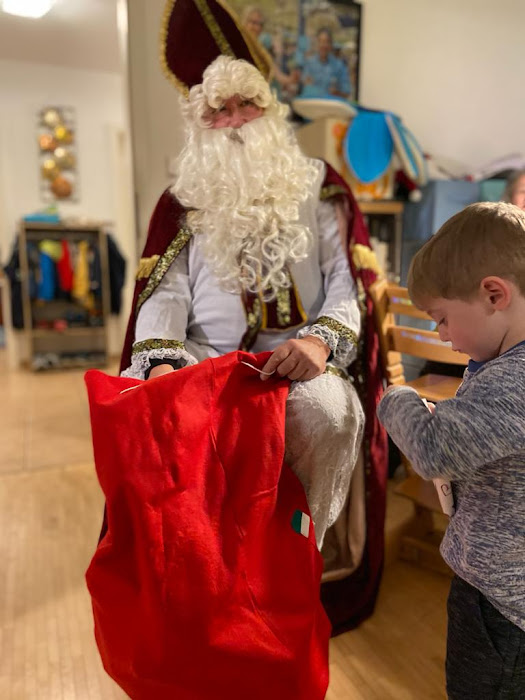 Lyons Cub believes in Saint Nicholas. (Just a hint: Here in Germany, Saint Nicholas comes on December 6th to bring presents for the good kids, while bad kids get coals from his mean companion, Knecht Ruprecht (“Krampus”)). Kids used to put their shoes in front of the door to get the gifts in, but in modern times, I don’t think anybody is doing that anymore. The gifts tend to be too big for shoes nowadays! Anyway, our Saint Nicholas is not the “Santa Claus” who comes for Christmas in the United States. At Christmas (the evening of the 24th of December), “das Christkind” (the Christ Child) comes to German children to bring presents.

Last year, our first winter in Germany, my sister’s husband disguised as Saint Nicholas, and with his long, white beard, burgundy-and-golden robe and hat, and his golden staff he was so well disguised that my then 2-year-old son didn’t recognize him (he was to be 3 in January, so he was already very verbal and had quite a good understanding of who Saint Nicholas was—namely, a good man rewarding children who had been nice during the year). And he was very serious about that.

Grandma, Aunty, two cousins, Lyoness and Lyons Cub had assembled in our living-room when you heard heavy footsteps coming up the staircase. There was a knock on the door (or a ring on the bell? it’s a modern Saint Nicholas), and Lyons Cub raced to the door to open and greet the long-awaited Saint Nicholas. (Embarrassingly, he had sprinted to the door several times before, when it was the Amazon delivery guy or somebody else, and he was shouting, “Sankt Nikolaus!!!” every time, just to be disappointed 😉 ). This time, it was the “real” one!!!

Saint Nicholas stepped in and asked with a grave voice who all the people were.

Mommy and Lyons Cub had baked cookies with sprinkles on for Saint Nicholas the day before:

Lyons Cub politely led him into the living-room where we wanted to celebrate (and then on into the kitchen to show him his toy kitchen!! That was not part of the script…).

Saint Nicholas took off his hat, because he was hot, and let my son hold it. He was thrilled! Later, he got to hold the rod, too. The bearded man proceeded to sit on a chair, took my son on his lap, and started unpacking his ominous, red bag. Leander went right for the bag!!! But Saint Nicholas wouldn’t have it. He gave him the rod to hold and read each name on the presents. My son was allowed to hand over the gifts to the recipients. (He ended up with most of them.)

Saint Nicholas asked my son in a grave voice if he had been good, and he squeaked back, “Yesss!!!” (Well, apart from a few “terrible two’s” temper tantrums, mommy can confirm that.)

Lyons Cub got a green dino sweater from Saint Nicholas, and he wanted to wear it immediately! Saint Nicholas helped him to put it on. He also got some children’s books and candy, as well as a Paw Patrol car. His cousins received calendars with baby animal photos and delicious German Milka chocolate.

So it looked like everyone got presents, mommy had wrapped some china ware in Christmas wrapping paper, so she got some gifts, too!

Let’s be happy and cheerful

And rejoice from our hearts.

Soon our school will be out;

Then, I’ll put out my plate;

I’m sure Saint Nicholas will put something on it.

When I sleep, I’m dreaming that now,

Saint Nicholas is bringing something for me.

When I have woken up,

I’ll race to my plate.

Saint Nicholas is a good man,

Whom we cannot thank enough.

Here are some pictures of the children unwrapping their presents:

Saint Nicholas admonished the children to be good during the following calendar year, and promised he would come back next December 6th, to check whether they had behaved and done all their chores. More fun and play and presents would await them. It was bye-bye to Saint Nicholas!

He left through the staircase, the way he had come.

For weeks, Lyons Cub would run to the door when the bell rang, thinking it was time for Saint Nicholas to make his appearance again 😉 Soon, it will be that day.

In the United States, I couldn’t find any beautiful Saint Nicholas costumes, but there are cardinal’s and pope’s costumes that will do as a substitute. Don’t use a Santa Claus costume, because that’s not really it! That’s far too simple, without lace, fringes, and all the details that go into a real bishop’s attire.

Happy Saint Nicholas Day to all!!!

2 thoughts on “… Have Saint Nicholas Come Visit Your Toddler?” 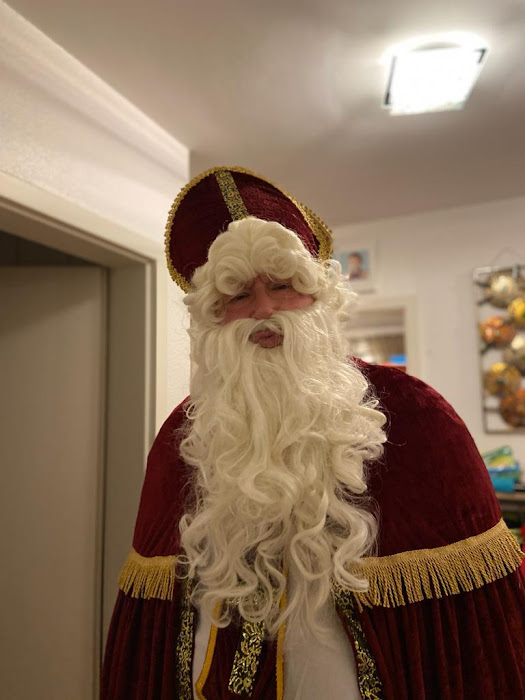