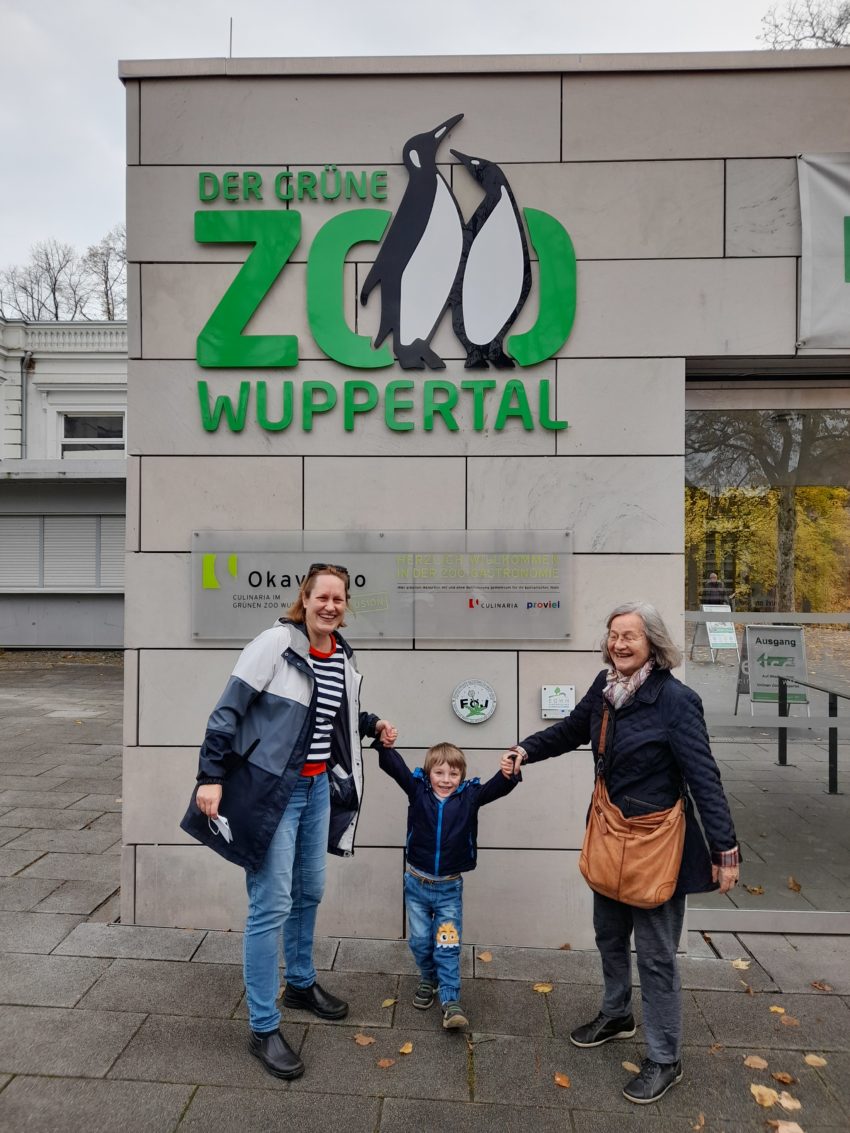 Big day for Lyons Cub!!! We visited the zoo in the city of Wuppertal on October 31st. Alas, due to the danger of Covid-19 transferring from people to the big cats, we couldn’t visit the lions and tigers. However, the brown bears, the elephants, the pelicans, the penguins, the seals, the deer-pig (yes, that’s a thing!), the flamingoes, the macaws, and lots of other animals were there and enjoying the weather. I had been at the Wuppertal Zoo when I was a little kid, but of course, I didn’t remember anything. Grandma remembered, but had forgotten how hilly the zoo is! We were walking up and down the winding paths, and it was quite exhausting for her and even for me. Only Leander ran ahead and always wanted to go to the next attraction… this is the beautiful path we walked:

You can buy a ticket online, because there’s only a certain number of visitors admitted due to the pandemic. We were there in the afternoon from about 2:00-4:00 p.m. There’s a big, free parking lot at the foot of a hill you have to push the stroller up until you reach the entrance of the zoo.

The colorful autumn leaves were really beautiful, and the area was vast, with big outdoor enclosures and indoor housing with lots of rocks, trees, stems, both natural and artificial structures. We were lucky that it didn’t rain the whole day, so we enjoyed the last day of October. What a nice way to stay away from the Halloween commerce that has already invaded Germany (although, strictly speaking, we don’t celebrate Halloween and don’t do Trick & Treating). While his cousin had a Halloween party sleepover, Lyons Cub watched animals.

The first building we went in was “Aralandia,” the free-flying aviary for the macaws. We went through several security doors that opened automatically after Lyons Cub pressed a switch. The area was amazing! A bridge was leading through the terrain, and the birds (which you were not allowed to touch or feed, of course) were sitting and flying all around us. They also had an inside part adjacent to the kitchen that prepared their healthy food. Under the bridge was a pond with flamingos.

There was also a little waterfall:

I think my son liked the bridge more than the parrots 😉 Once outside Aralandia, we walked past an aviary for the scarlet ibises. A kid yelled excitedly, “flamingoes!!!”, but we explained to him that flamingoes have long legs, and these birds didn’t.

Lyons Cub was a little disappointed not to see the polar bears. I should have researched that on the Internet before, because he loves polar bears (because I read books about Lars, the little polar bear, to him all the time). Anori, the female polar bear, was moved in mid October 2021 to Mulhouse, Alsace, France to enjoy a much larger and suitable environment, and Luka, the male polar bear, went to England in November of 2020 already. The Wuppertal Zoo is not keeping polar bears anymore and instead enlarged the seals’ enclosure.

The sea lions were next on the program. They were swimming right in front of us, although none of them wanted to play with the red ball, the pool noodle, or the float. One was quite massive! The stone wall was a bit too high for toddlers to look over, but Lyons Cub stepped onto his stroller, and then he could see.

The pelicans were clapping with their beaks. Neither Lyons Cub nor I had ever heard this before. Cool! They were really big and stood close to the fence. Of course, this is no petting zoo and feeding was not allowed, but my son enjoyed watching them (although he always wanted to go on and on, to see the polar bears).

The penguins were a major attraction, because you could walk into a cave and see them swim right over your head. It was really cool. Some were chasing one another, and some came really close to the glass. This was definitely my favorite part of our outing, but my son just wanted to rush on to the next thing.

Up the staircase was the meeting place of the penguins. It was fun to see them waddling around and slipping and sliding on the artificial snow, which a snow machine dropped from the ceiling.

One penguin was flapping his wings the whole time. I’m not sure what he wanted to tell us…

Then came the deer-pigs. I had no idea those even existed. Strictly speaking, we expected to see the tapirs, but they were probably hiding inside. The deer-pigs had two babies, which had brown stripes down their backs.

Of course, the zebras couldn’t be missing… Which kid doesn’t love them?

Next up were the elephants. They had young, which were practicing fighting with one another. One of the adults was trying to get inside, but the door was locked, maybe for cleaning. We also walked inside the elephant house, but it smelled terribly in there!

The zoo had a nice restaurant with an outdoor beer garden. There was a kiosk that sold delicious German waffles on a stick. Of course, we had to try them!

Of course, the Wuppertal Zoo is also happy about donations. The spiral wishing well was fun for the kids and practical for the parents to get rid of some change:

There were plenty of flowers still around at the end of October:

Our visit to the brown bear was a bit disappointed because we only saw her butt. She was hiding in the thicket of her enclosure, which was very natural, wild, hilly, and with lots of vegetation. Oma had to take a little rest here.

The monkeys were not outside, but the cave with the viewing windows was quite nice.

Before we left, we watched the ducks on the pond:

We hope you enjoyed our little trip to the zoo! Bye-bye for today.

And if you ever travel to Wuppertal in Germany, don’t forget to visit the zoo!

For more adventures with animals, check out our trip to the Reuschenberg Wildpark.

2 thoughts on “… Visit the Wuppertal Zoo?”