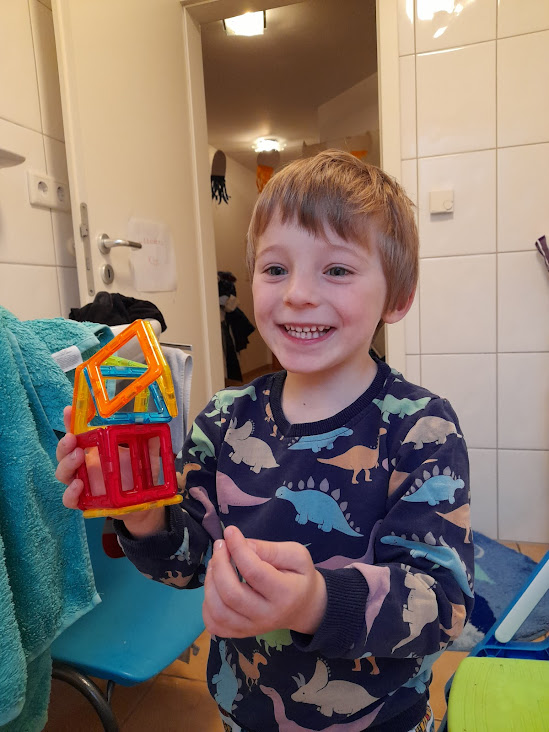 Right next to bristle shapes, I would recommend magnetic building blocks as an educational toy for toddlers and preschoolers. They train the hand and brain, because kiddo has to assemble structures with the understanding of magnetic forces, which is not an easy task. (Although, once your kids find out that the fridge and the range are magnetic, there’s no stopping them!!) At almost four years of age, Lyons Cub has finally mastered the skills of building structures like 3-dimensional houses and towers and robots by himself. Only with cars, mommy still helps a bit, so they can drive and don’t fall apart immediately.

Keep in mind that one box is hardly enough. Maybe you can get a used pile on eBay. They don’t need to be new and shiny for the kids to have fun; the most important thing is that they don’t run out of blocks in the middle of play. I bought two boxes for Lyons Cub, so he has a variation of shapes and colors, as well as additional pieces, such as tires and plates to close the “windows,” etc. And make sure you’ll have a big enough container to put them all in, so your kid’s playroom doesn’t get cluttered (I mean, could it get any worse???).

Do you have a Christmas present for your toddler yet? If not, this might be an idea!

My son wakes up to run to his plastic box full of magnetic building blocks, and he builds while mommy gets ready in the morning. When he has finished creating a building of some sorts, he carefully, carefully carries it over to the bathroom where I’m lying in the tub, to show me his work of art 😉 He has even found out that our clothes hamper is magnetic, so now there’s a stalk of magnetic blocks growing inside of it 🙂