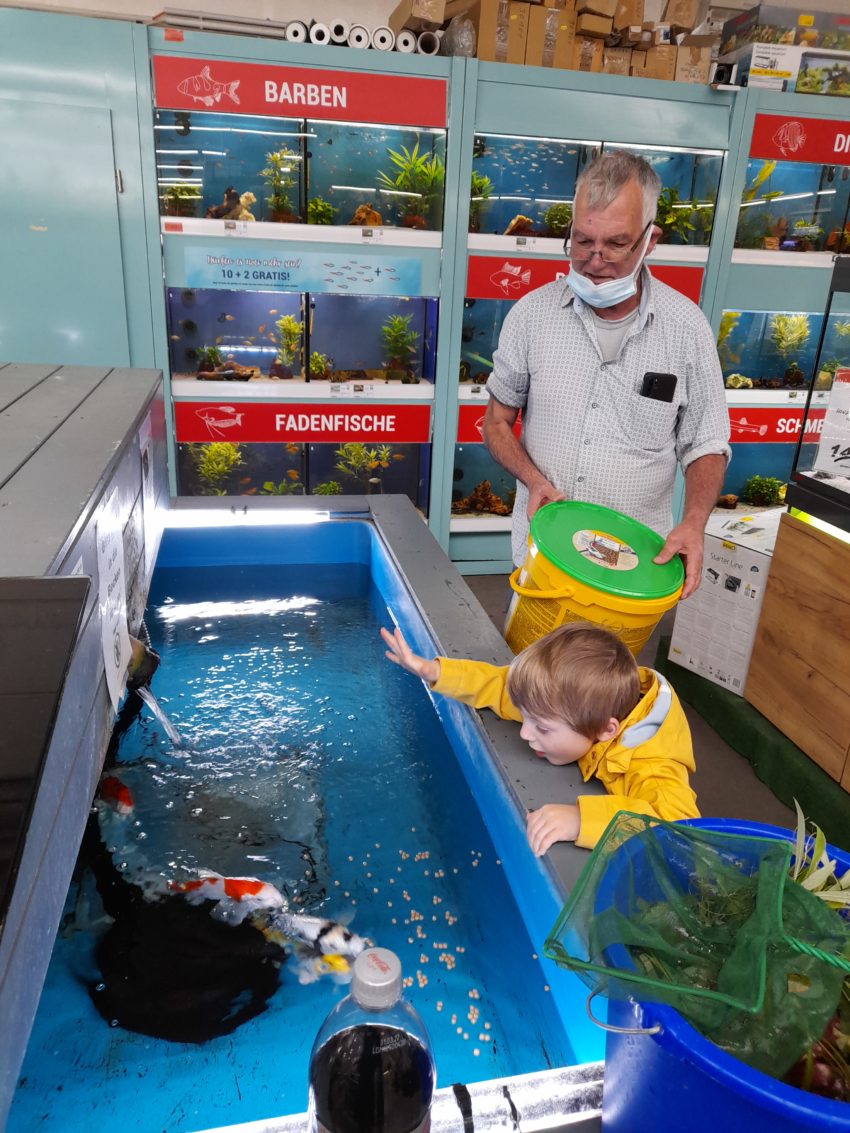 Today was a special day for Lyons Cub. It was raining, so we didn’t drive to the animal park to walk around outside. Instead, we drove to three pet stores to visit the animals. He couldn’t pet them, but he got to look at bunnies and budgies in their cages, and—best of all—a clerk allowed him to feed the goldfish! We didn’t buy anything, of course. One of the three stores just had food and supplies, no live animals. The first one had beautiful fish, rabbits, and birds, and the last one was a garden center displaying rare plants and exotic fish. There, we bought an orange orchid for grandma’s upcoming birthday.

At first, we watched the bunnies. The tan one was sleeping and the white one was eating, so not much going on there, but my son was excited about them, anyway.

The awesome part about pet stores is that they have displays with hundreds of squeaky cat and dog toys!!! Even mommy likes to squish them and listen to the different sounds. And soon, the store was filled with weird noises, and Lyons Cub was having a blast! Luckily, nobody was bothered (except grandma, a bit).

Actually, when my son was a baby, I bought him some squeaky dog toys that made cool sounds. He has a pink rubber piggy that grunts very realistically (he was once scared of it, but soon got to love it). He also has a shark dog toy that looks quite real. They were cheaper than baby toys and caught his attention immediately. Thus, my tip—if you want to attract a newborn with sounds, why not get a soft, squeaky doggy toy? If you have a dog, too (we had two Labrador Retrievers, Honey and Sally), be careful that your baby and your dog don’t share a toy and take it in their mouths…

After the dog toys, Lyons Cub admired the fish. He grew up with a big cube aquarium and an outside pond with tadpoles and froggies, so he always loved to observe water creatures. He looked at colorful guppies, sword fish, angel fish, rainbow sharks, snails, and goldfish. The latter fascinated him most.

Here’s the part where Lyons Cub gets to feed the really greedy goldfish. They came to the water’s surface with gaping mouths, rushing to snap a pellet. He did a good job feeing them 😉

The clerk was super nice and let my son throw a few handfuls of goldfish food into the tanks. When he didn’t want to stop and feed other fish in the store, the clerk nicely explained that those weren’t hungry anymore and already had gotten their food, but that he could feed him, because he hadn’t had anything for quite a while 😉 He even told him that he could feed the fish again if he came back the following Saturday. We’ll have to see about that 😉

The garden center was amazing, especially its collection of Christmas displays. My son admired the clay, brass, and hand-crafted items while Lyoness and grandma lion drooled over the orchids, lilies, palms, and other plants. Oma got her early birthday gift already, an orange orchid. When my son saw the tan cats, he said, “Frankie!” and I must admit, they really looked like our kitten, which lives in Carbondale with our friend now.

Wow! This was a paradise for young and old alike. Of course, they had fish, too. We admired the beautiful, big, flat discus cichlid fish. They cost about EUR 44 a piece. Grandpa used to have those and faithfully renewed the water every week. My favorites were the koi angel fish, which we used to have in Clarksville, too. And the koi betta was amazing!

Lyons Cub got to see bunnies again, and he was not the only child observing them; a little girl with her parents was there, too. One rabbit, a calico, looked out of a window in its wooden house and walked down a ramp.

What a fun way to spend the long weekend (Monday is All Saints Day, so we’ll be off to the Wuppertal Zoo)!