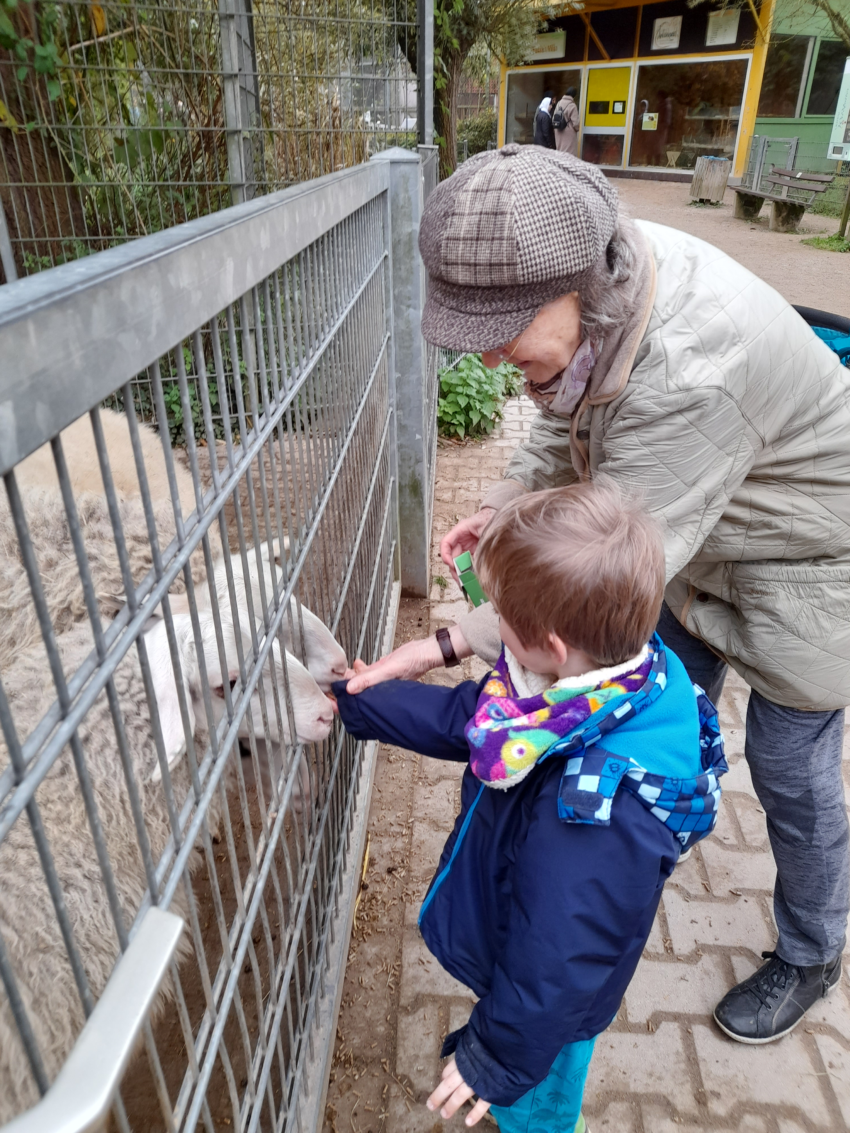 Lyons Cub loves parks, like the one with the climbing animals and exercisers, but most of all, he likes to pet animals. (Well, he grew up with two dogs, Honey and Sally, and two cats, Felix and Frankie, and several crested and gargoyle geckos.) So today, he was in for a treat. He had been sick for a week with a little cough and unable to attend kindergarten, so his first feeling-well-again weekend, we are spending in a park for wild and domestic animals. Grandma came along, too. We packed his little, yellow lion backpack with rice wafers, orange juice, and some pants to change (just in case he jumps into a muddy puddle, because it has rained here for the past few days), purchased our tickets online (visitor count due to the pandemic), and set off right after lunch time.

The first animals Leander saw right after the tent at the entrance were some kind of black-and-white birds on high legs with extremely long, sabre-like beaks. He took his tiny camera to snap a picture. I didn’t even read the sign what they were, because we were fascinated by one of them that had picked up a stone, washed it in the pond, took it out, rolled it around, and washed it again. What a strange behavior! I wish my son would clean up his toys that well 😉 Now I know, it’s a peewit (or magpie-lark, or mudlark, in German, “Kiebitz”).

I had to disappoint him that we couldn’t visit his next goal, the “vampires” 😉

He’s already in Halloween spirit, and he was totally convinced (since they are bats) that they would be in one of the cages there. No such luck!

Next up were the alpacas. They are a species of South American camelid mammal, often confused with llamas, but much smaller than these. However, they are closely related and can even be bred together. There was a friendly black one that came to the fence to greet the visitors. In the back was a white cria, munching on some branches. When I told my son that they can spit, and grandma warned, “not so close!”, he took a quick step backwards and landed on his bottom. He laughed, and so did the people around him.

The next step were the goats. I could smell them from afar, but Lyons Cub obviously wasn’t bothered.

He wanted to pet them immediately, and they were very friendly and used to people coming up to them (of course, they hoped for food; there were machines where you could buy little, green packages of pelleted food for EUR 2.00, and they also had set up a big treasure chest to dump in chestnuts as a donation for the animals). Here, he’s stroking the goats gently. Several of them looked like they were about to have babies. Alas, the machine spitting out the feeding packages was empty, and we would have to walk through the whole park to find a full one, so feeding was postponed to our way home.

Then, we saw the porcupines, large rodents with coats of sharp quills to protect them from predators, and mommy was waayyyy more excited about them than junior, who always wanted to “go that way,” “go this way,” “walk further”…. (He knew there was a playground somewhere!)

One of the prickly thingies wanted to escape by digging and make its way over to the deer, but it didn’t get through the fence. It was impressive how long their spikes were, and how they could set them upwards when walking. Scary! Wouldn’t want to touch one.

After the porcupines, there were the deer. But we didn’t stay long, since the playground was in sight, and sonny boy had to climb on a truck tire swing and then try out the slide and the cable car (the latter was quite brutal and knocked a bigger boy off when coming to an abrupt halt at the end, but my son hung on for dear life and did actually very well on it). The smell of bratwurst hung in the air (but as you can see, grandma had his yellow backpack with food, so we would save some money). We’re always taking the stroller along, although my son, strictly speaking, is too tall for it and can walk very well alone–just in case he gets tired. (And that did happen at the very end of our trip.)

We saw cute guinea pigs, which reminded me of Spike and Angel, my late husband’s pets when we still lived in Carbondale, IL. I took them with me when I moved to Tennessee in 2017, but I was terribly allergic to them and had to rehome them after a couple of years. My son still got to meet them. They make such sweet squeaky sounds when food is in sight!

Lyons Cub admired a beautiful gray heron spreading its mighty wings, and a second one walking by proudly.

There was a tawny owl, which you can see hidden in the right upper-hand corner of the third picture:

This owl can hunt on the ground and in the air. It lives on worms that it’s pulling out of the ground, as well as rodents, and in winter, when the latter become scarcer, it catches birds instead. The tawny owl likes to breed in buildings or in empty nests of other birds, and once it has found a home, it usually remains faithful to it. The sign says that its characteristic call, “hoo hoo-hoo, oo oo” can be heard from afar, and its warning cry, “kju-witt” sounds like the German, “Komm’ mit!” (“Come with me!”), which lent itself to superstition. It was thought that an owl was the messenger of death, and that this bird of the night would come to take the soul of the deceased with it.

We walked through the forest, which had educational signs in many places, talking about the birds and amphibians living there. One sign explained the niche of dead wood, where hedgehogs live, for example. We admired a pond with a little fountain and so full of pond scum that it looked like a meadow you can walk on. My son was fascinated by the pond moss, but grandma made sure he didn’t get too close to the water. There was a little hut he went in, to look out of the window. The sign on the hut said, “Saugstelle,” which means it’s a place to take water out for the fire-engines (and also for other reasons).

What mommy found fascinating are the stems of a parasitic plant that melted into its host, making it look like veins running all up into the tree, as well as the thicket of red branches of a bush:

Finally, we found a dispenser that still had food inside, so we purchased a couple of packages for Lyons Cub to feed the animals. You can see very well in the first video that he was still quite scared of the sheep and threw the pellets over the fence.

However, when he watched the older kids and grandma feed them, he finally dared to put the food on his outstretched hand and offered it to the animals through the fence, and that went much better. Soon, they all crowded around him. I have to say the sheep didn’t look like they needed any more food. But feeding the animals was allowed (only with the purchased pellet food, not with food brought from home, not even chestnuts, since some could choke on them).

Here’s his first attempt at feeding the sheep:

And this is when he had learned to put the food on his hand instead of throwing it over the fence:

We went past the deer again on our way back. There was a fence in front of the fence they were behind, so my son would never have been able to throw them some pellets, but mommy could aim far enough. At first, there was just one, a kid that still had spots; then, there were two; then three, and then a whole lot of them!

Lyons Cub seemed to like the goats the most (although he told me, “I like all animals!”). Two of them started a little fight and banged their horns (they were still kids, playing), and the mommies-to-be waddled over to get a snack, and a big dude with long horns was very persistent, yet friendly. My son loved to pet the little horns of the young males.

Now, it was time to return home, since the park closed at 5 p.m. Normally, my son doesn’t like it when “it’s over,” for example when we have to leave a playground, but after walking so much today, he was pretty tired and even wanted voluntarily into his stroller, with a bread roll and an orange juice. We drove back home and dropped off grandma on the way. He was in bed by 7 p.m., which hardly ever happens without dispute! 🙂

For more of our adventures with animals, check out our trip to the Wuppertal Zoo! 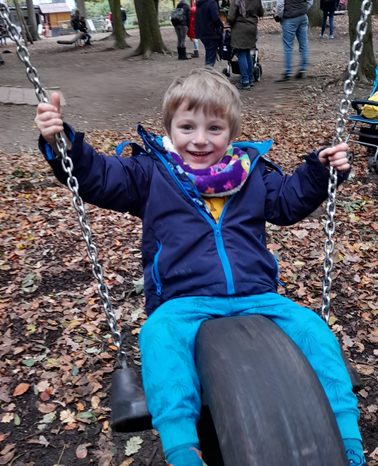