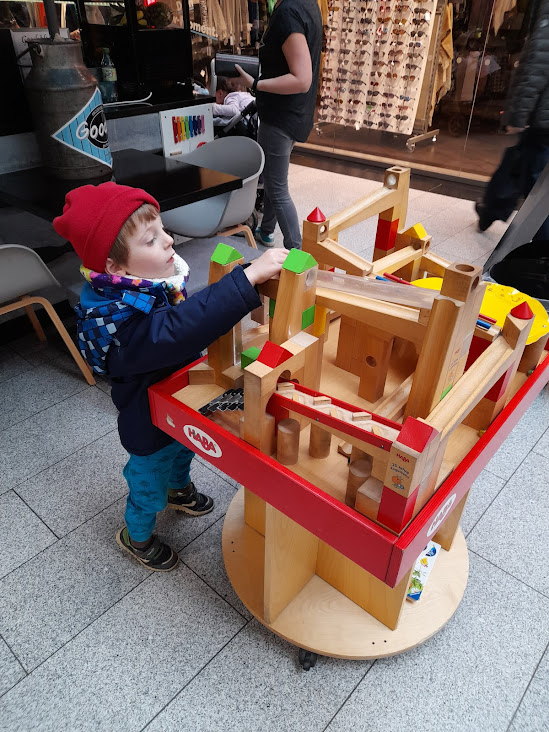 Okay, so here’s something for the big builders among you: Feel inclined to spend many hours crafting a super-duper cool wooden marble race track table for your child? The one Lyons Cub and I found was in a Mall, but you can put one together at home with spare building blocks from eBay and an old table. Here are some ideas from a German blogger mommy how to set up a marble race track. I don’t know whether I would have the stamina to erect that myself (and if I don’t glue the blocks, I’m sure my son would knock over everything before the day is done).

My son already owns an Eichhorn wooden marble run kit that he got last Christmas; back then, he was nearly 3 years old, and it just frustrated him when blocks toppled over or the marbles got stuck. Now, at almost 4, he LOVES it!! He can play with it (with grandma’s help) for a couple of hours. It challenges him more than his plastic marble run, which the whole family still likes more because it was so cheap that we could buy several different sets to combine into a huge marble race fortress with different constellations. But seeing the table with the complicated set-up (especially the yellow metal bowl, in which the marbles turned and drew their circles) that came with a musical scale staircase was quite an event! (These blocks were permanently fastened; nothing could fall over.)

You can get new separate parts to assemble a fanciful set-up here (they’re pricey, I kid you not. Maybe your kiddo has generous grandparents):

Better would be to get used ones from eBay or friends and family, and just to be creative with your own set-up. I will use the Eichhorn set my son already has, and I’m getting him the yellow bowl for this year’s Christmas, so he can combine them. Maybe I find some cheap second-hand ones to join what we got. I’m still debating whether I should fixate what we build with transparent packaging tape (definitely no glue, because at some point, we have to take things apart for new arrangements or simply to store them away). Wish me luck!