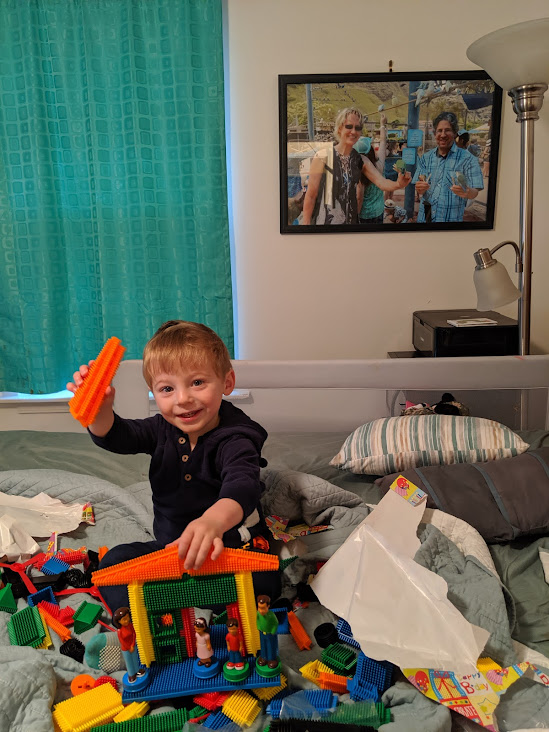 Looking for a great educational tool for your toddler builder? Next to Duplo, MegaBloks, and Lego, I discovered bristle shapes. Lyons Cub received a package from a dear friend for his second birthday. I remember them vaguely from my childhood in the 1970s and 80s as “Nopper Steckbausteine.” Curious, I looked them up and found out they were already invented in 1969 as Stickle Bricks, and they are also referred to as “Nopper,” “Bristle Blocks,” “Fun Bricks,” “Clipo,” “Krinkles,” “Multi-Fit,” and “Thistle Blocks.”

Those prickly, bristly fun shapes, whatever they are called, are perfect for little hands to put together, although when my son was two years old, I still had to assemble the houses and cars for him. He played around with the cars until they fell apart and put together in different shapes again. At the age of three, he built towers, houses, and cars by himself and put together family constellations with the figurines, telling whole stories.

Here are the unpacking photos when he got them for the first time in his life, which shows his joy as he found the bristle shapes. They were a great present, and I can warmly recommend them. The bristle shapes will last for years and still be of interest to your child at school age. I suggest getting lots of them (I bought more afterwards, so he could build more elaborate things; there are never enough in one package to satisfy a child’s building needs). I keep them in plastic boxes with lids, so they don’t lie around on the floor all the time.

It was really cute to see that he integrated our cat Frankie into his play, too. Frankie Boy is a very good natured cat and let him play with him (indicating when it was enough), and Leander was very gentle with him. Coincidentally, Frankie now lives with my friend Mary from Carbondale, IL, from whom Lyons Cub got the bristle blocks! Frankie was always there when my son unpacked presents, because he loves wrapping paper!

Now, at the age of almost four, he tells elaborate stories how an asteroid came crashing down and destroyed the whole earth, and then the people have to rebuild their homes. He even showed me on his solar system poster, which he received from a local pharmacy and which is hanging on our living-room door, where the asteroid was (and he pointed out a black hole for me, too). He’s very interested in astronomy (a year ago, he was all about volcanoes, and now it’s about stellar constellations, black holes sucking everything in, and the sun one day becoming a white giant and swallowing the earth… he got that from a scientific article I explained to him).

Although his daddy is in heaven (“behind the white cloud there,” as he explained to another father on the playground), he integrates him into his play. He picked a figurine to be daddy (he didn’t know the English word for “husband,” so he said, “your, your, your – – – Papa!”), a figurine to be Mama, and a boy figurine to be Leander himself.