Already at 10 months of age, Lyons Cub saw a fire engine, but he didn’t enjoy this one, because it was at a pediatrician’s office in Michigan; he had gotten an ear infection while we were visiting relatives of Daddy’s. His love for fire engines remained unbroken, though. Of course, he had the little fire engine from Marshall from Paw Patrol. And he had a wooden ride-on fire truck through the seat of which he could throw triangles, circles, and squares, sorting them.

When he was a year older, he loved to wear his bright red fire engine shirt. But the most exciting fire engine before he got to climb on the real thing was a bouncing castle that someone in Clarksville, TN had erected for his kid. It was as high as a house…

I bet all the kids in the neighborhood went there for jumping. It looked very dramatic. That thing must have cost a fortune! And I don’t know how much energy it needed to stay inflated for so long. Lyons Cub would have loved to jump on it and slide down from the roof.

It looked so realistic! Alas, this extraordinary bouncing castle met a sad fate: we had a storm, and it got thrown through the neighborhood, being cut open on a neighbor’s fence and mailbox. Its remains lay on the front yard of the owners for weeks. I wonder if they were able to patch it. It had been so amazing. My son and I made many excursions to the “burning house,” as we referred to it.

This week, he was lucky to see a real firetruck and even was allowed to go inside and look around! He would have loved to climb onto the ladder, but of course that was not part of the service. In the front of the cabin sits Grisu, the little dragon. 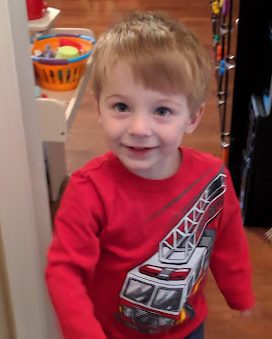