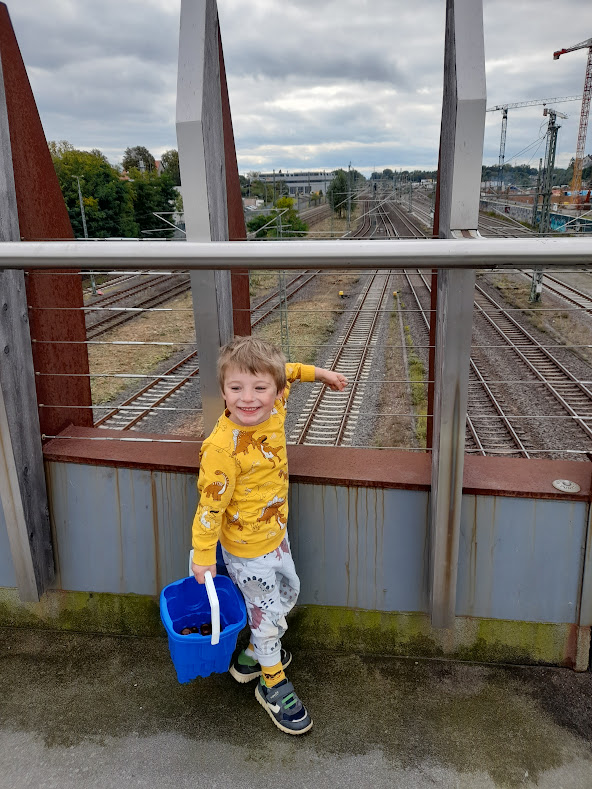 It’s the beginning of October, and the chestnuts are falling from the trees in abundance and knocking on the cars parked underneath. So we thought it’s time to collect some to make cute chestnut animals with grandma. We set out on a cloudy but dry day with a blue bucket and a green bag. An insider tip sent us to the city of Leverkusen, home of the multinational pharmaceutical Bayer company, where there was an awesome chestnut alley close to a railway station, which per se was a great adventure for Lyons Cub. He has been on trains before, but seeing them from a bridge high above and listening to their fearful screeching noises as they drove out and in was an excitement.

By the way, if you like Lyons Cub’s outfit, you can check out his dinosaur sweaters and fall pants at my other posts.

We started picking chestnuts, being mindful of the surprises doggies had left for us, also hidden under the fallen foliage. Lyons Cub set the pace. Thus, when we had merely collected ten chestnuts or so, he spotted the bridge spanning the railroad station and wanted to walk over it. I took him on my back first, because the railing was too high to look over it.

But soon, the railing became lower and he could see the trains. He was just a teeny bit scared of their noises, but loved walking up and down the metal stairs to the other side of the railroad station. He saw big construction cranes, too.

Lyons Cub liked the graffiti flag underneath the bridge. It says, “Forza” Bayer, which is Italian and means “force,” or “power.” It can also denote the ability to face the difficulties of life, like “come on” or “you can do it!” I guess they meant the soccer team, but this message rang eerily sad, because the Chempark where the Bayer company is located recently suffered an explosion that killed seven workers and injured lots of others.

After admiring the trains, we walked back down the bridge and all the steps to the chestnut alley. By then, Lyons Cub was already tired from all the walking, so we went back to our car, where he had a little picnic of rice wafers and orange juice before picking up grandma. And she made nice chestnut horses for him with match sticks! I found some sticky googly eyes that we attached with glue to the chestnuts. Most of the chestnuts are actually for his kindergarten, which wants to create a chestnut bath for the kids to roll in! He tried that out already by pouring his basket out on our living-room floor and rolling in them 😉 We agreed to put the chestnuts into a big, empty cardboard box, so that mommy didn’t have to search for chestnuts all over the room. Rolling in them was much fun, and quite noisy!!!

4 thoughts on “… Make Chestnut Animals With Your Toddler?”