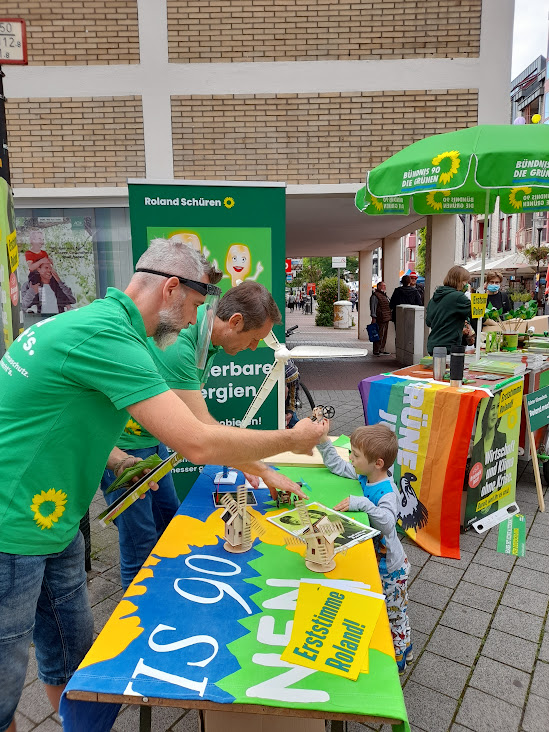 Angela Merkel has been in power for 16 years (and, in my opinion, has done a great deal for our country). I admire her for how she got us through the pandemic this far (and for having a doctorate in quantum chemistry, of course!). She faced some backlash for her refugee politics, but in my view, she did the most humane thing by letting over a million of Syrian refugees into our country. Some refugee parents even named their babies after her!! She deserves to retire. Who will be the new chancellor? Which party will rule, and in what constellation (coalition with another party, to receive the majority)?

Yesterday, Lyons Cub and I were in the city center. We admired the flowers at the booths at the market place, and he got to lose some calories on the Jumping Spider. While we were walking through the streets with his trike, the party advertisers showered him with little gifts: a red and a white balloon, a green squeeze ball with fuzzy, yellow hair from the SPD (Social Democratic Party), a coloring book with colored pencils and an orange rose (for grandma) from the CDU (Christian Democrats; Chancellor Merkel’s party), and colored pencils and delicious bread rolls with pumpkin seeds from the Green Party.

The best thing was that the guys working at the Greens‘ table dedicated a lot of time to my son, letting him touch their solar-powered wooden toys and trying to explain to him how solar power works (he didn’t get it; he tried to move the blades of the windmills by himself, but he enjoyed all the attention). He received two green pinwheels (which we are going to stick into our flower pots). And the pinnacle of this day’s adventure was, of course, the Jumping Spider trampoline…

This morning, we picked up grandma and walked to the primary school where the elections for our quarter were held. Lyons Cub was so proud that he was allowed to put mommy’s vote into the ballot box! He exclaimed:

Curious who will win the elections 2021? Check the results here.

1 thought on “… Take Your Kid to the Elections?”