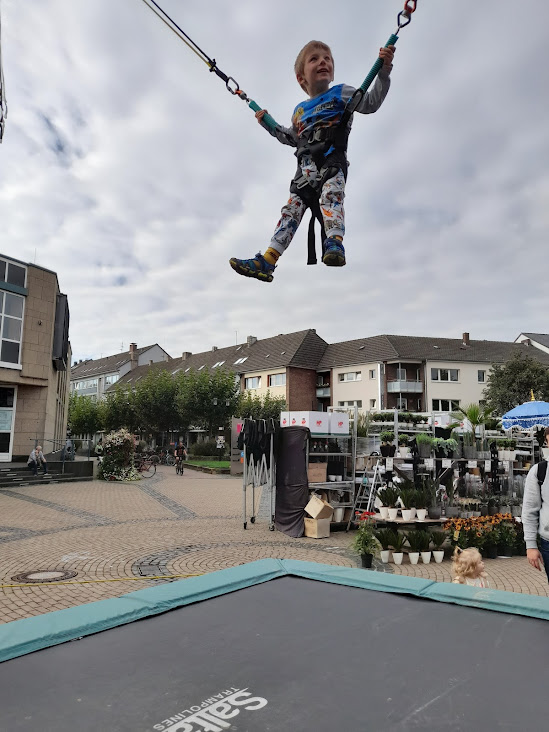 Already as a baby, Lyons Cub was in love with his door frame jumper. At the age of 2, Lyons Cub loved nothing more than the Jumping Spider on our frequent trips to the Governors’ Mall in Clarksville, TN. Although he was so small, he was no less daring than the bigger kids (only the backflips weren’t his thing; he preferred to jump straight up and down). Even mommy had to try out the Jumping Spider (to make sure it’s safe for kiddo, of course!). He would shout, “Up, up!” and have the time of his life. He also said, “jumpy, jumpy!” I bet the people working at the Jumping Spider were amused.

It cost 7 bucks for three minutes, and oftentimes, we did two or three times in a row. I made sure that we ate lunch in the Mall AFTERWARDS (just in case his French fries wouldn’t stay down). They knew us there already, because I used to purchase 10x punch cards, and we jumped at least three times per week, 2-3 turns per day, until the end of February 2020, when I got weary that the pandemic would start in the U.S. soon, too (I had seen the example of Germany, where my family is from, and it all happened just a few months later in the U.S., too).

If you have one near you, and if you’re still on the fence about this, try it out. You AND your toddler. The kids will be safely strapped in, so don’t worry they might fall. I saw some little kids who were scared and wanted back out. Others were doing forward flips and back flips and enjoyed the experience. The lady operating the Jumping Spider in the Clarksville Mall told me it’s great for burning calories–well, if you have THAT much money that you can stay on it long enough to burn anything, maybe she’s right!! 😉

Everyone got to see his naked belly, because his shirt kept slipping up. As you can see, he dared to make one forward flip with the help of a guy who worked there.

At the age of 3.5, my son still loves to jump (although he seemed more enthusiastic when he was little, haha). It was the day before the German elections, and we happened to come across this Jumping Spider in the city center, among all the election campaign booths where my son was showered with little treats and gifts. Outdoors, it’s a completely different perspective, too. He had a great view of the market place with all the people.

I have to say, I trust those Jumping Spiders with the ropes more than an ordinary floor trampoline. With those, I was always a little worried he might jump off and get hurt, or another kid might jump onto him, or he might bang his head against another child’s head. He had a tiny Little Tikes trampoline at home, after he begged and begged, having used those in his gym group at Dance Force in Clarksville, where he used to do some toddler training once per week until the pandemic hit. And when we were in Germany over the summer break, he got to go onto the big back yard trampoline with his older cousins. At least, being strapped in and hanging on ropes, he can’t fall off! And as long as he can jump, he’s happy!!

1 thought on “… Go on the Jumping Spider With Your Toddler?”