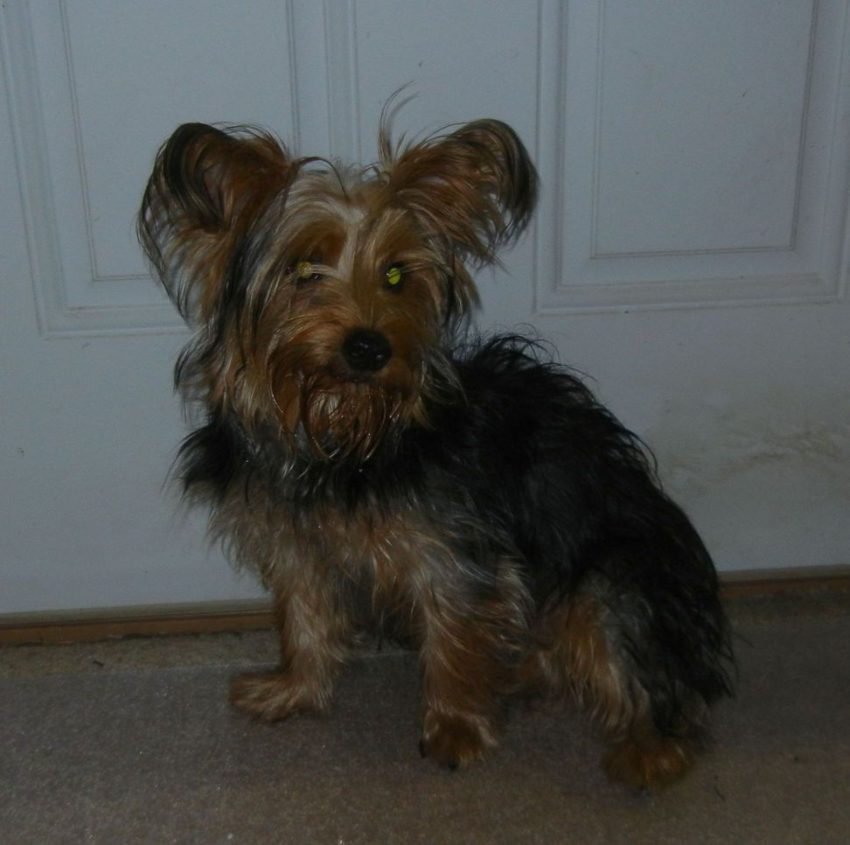 On Wednesday, September 7th, 2011 after an evening meeting at University Baptist Church (UBC) in Carbondale, IL, I walked down the steps and saw a particularly grumpy old lady screaming at something that was jumping up and down in front of her car… She finally opened her car door to drive home, and that thing jumped in, and she screamed even louder, waving her cane… “Out, out, you!!!”

It was a little lost, wet, long-haired Yorkie, and my friend Mary and I had trouble to get it out of that nice comfy car 🙂 None of the church people knew what to do with it, and it was late, so I offered to take it home, keep it with my two Labrador Retrievers, Honey and Sally, and the three cats (Lottie, Leo, and Frankie), and print a flyer so the rightful owners could find it.

Little did I know what problems the tiny thing would raise…. The scaredy new kid on the block had fleas!!! First of all, I had to give all my animals an extra dose of Frontline, due to the flea infestation. He was SO hungry and thirsty!

Then, I went to buy a package of Frontline for little dogs (under 15 pounds), because what my 60-90 pounds Labs got would have been too strong for the newcomer. The Yorkie had such long hair that I described it as a FEMALE on my photo flyer, which I posted on every wooden post around Skyline Drive and Chatauqua Street… I bought it a pink leash and a name tag that said, “Lollipop.” The next day, I took it to the groomer, where it got a flea bath, a neck tie, and a nice short hair cut, and then I saw it was actually a boy… It was totally hyperactive and jumped onto tables and chairs, knocking things over…. it was also smaller than my cats!!!

Our little foundling really needed to go, so he relieved himself in a dry, comfy, and safe place:

On Sunday, September 11th, 2011 my friend Mary and I took Lolli with Honey and Sally and my host parents’ old Schnauzer Lilly to the campus lake. It was hilarious — my big dogs jumped into the water and brought back a huge stick (they always carried it together when swimming), and Lolli brought back a little twig thrown about 30 cm into the water — totally proud of himself!

I had him for an entire week and got several calls of people who “wanted” him, but didn’t own him. I had posted my flyer at pet stores and veterinaries’ clinics. Finally, on September 11th, after we had returned from our walk around campus lake, a young African American couple from Evergreen Terrace came, who had seen my flyer at the door of Petco. They had lost a “male” dog 2 weeks before, but took a look, anyway… and it turned out Lollipop was their lost “Buddy”!!!

You should have seen how he dashed towards their car when they called his right name. They told me they had tied him up at a picnic place and gone away for a short time, and when they came back, he was gone…. They were so happy to have him back (and a package of Frontline, which they were allowed to keep, because it was not the right dosage for my big breed dogs, anyway). My friends from church actually refunded me for half the money I had spent, so it wasn’t too bad… I’m glad I didn’t need to give that bouncy ball a permanent home, though! I was kinda booked out already…. with all the dogs, cats, and leopard geckos!