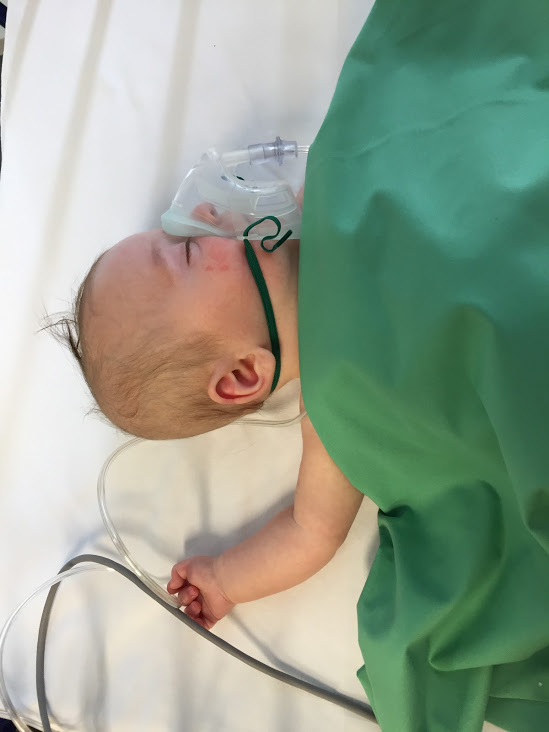 Lyons Cub was half a year old when, on our summer trip from Clarksville, TN to Düsseldorf, Germany, he had a hernia emergency right on the flight. Needless to say, as soon as we landed and our relatives had picked us up, we drove to the University Clinics of Düsseldorf, and he was put under and had surgery. He cried the whole way with pain. If we hadn’t done it at that time, he might have lost his right testis, into which his intestines had descended. It was blue and swollen as big as an apple.

This is how happy he was on the morning we started our flight:

Things turned bad really soon…. So what is an inguinal hernia? First, what it isn’t: an umbilical hernia. An umbilical hernia looks like a little grape on top of the belly button. It is harmless and usually vanishes by the age of five months; sometimes sooner, sometimes later. My son had quite a big one. As long as it is soft and squishy and can pushed inside, it is harmless. You only need to worry and seek medical help when it is hard. If it hasn’t vanished by the time your kid starts school, you can opt for surgery and have a mesh put in (that’s what the doctor I consulted told me). In my son, it vanished by itself at about five months of age. Here, you can see it when he was about two months old:

An inguinal hernia is much worse; it’s when the intestines descend and get trapped in the testes (either on the right side, the left side, or even on both sides; my son had it just on the right side); they can be starved off blood supply and die without surgery. Below is an excerpt from my travel diary:

Of course, the German doctors noticed right away how tiny he was; I mean, he was about 10 or 11 lbs at six months old and looked almost like a newborn. I had to explain to them that he was born a preemie (two months early) and suffered from IUGR, having spent the first three weeks of his life in the NICUs in Nashville and Clarksville, Tennessee. He was still not on the normal growth curve (which he reached at nine months of age) and received fortified, pumped breast milk to pack on extra calories.

If your child has an inguinal hernia, don’t worry about the procedure. It is quite common in babies. Normally, it is done in one day, and had my son not been extra small, I would have been able to leave the hospital with him after a day. However, the doctor told me since he had IUGR, he wanted to observe him for three days. After all, he had been put under. So I camped out with him in a comfortable room for the two of us, and we were treated really well and had the best care. I’m glad it happened in an excellent German hospital and not in the U.S. Since I did not have German insurance, I was treated as a self-payer and paid EUR 2,000, and that included three days in the hospital (and I could sleep over for free to be with him). I know that back home in Clarksville, he would have been at Tennova, and I would have been given visiting times. How dreadful that would have been, not to be able to comfort Lyons Cub around the clock! As it was, he had lots of visitors, especially grandma lion.

He acted like nothing really happened, and we were able to push him around outside in the stroller. Here’s my hospital bill, which my American insurance, CIGNA, refunded a few months later:

The best thing was that his scar was exactly in a skin fold, so it was barely visible. After a week, he could be washed in the bathtub already (not soaked, but wiped on his good side), and he enjoyed his summer break in Europe after all! Below, you can see his fresh scar, which got lighter after a few weeks and is not visible anymore at 3 years of age now. It was glued, and he had no stitches that would have needed removal.

On the picture above, you can also see that his umbilical hernia in the belly button was resolving. It was not high like a grape anymore, it was flatter. It still didn’t look pretty, but it dissolved completely shortly after.

A few days before we flew back to Nashville, we had his follow-up at the clinic, and his scar had healed really well. There was no indication that it was going to happen on the left side now. We were not scared of the long flight back. Lyons Cub had spent a great month in Good, Ole Germany, and had celebrated his baptism there, surrounded by the German part of his family. It hadn’t occurred to me that we might need to see a hospital from the inside on our summer trip!!!