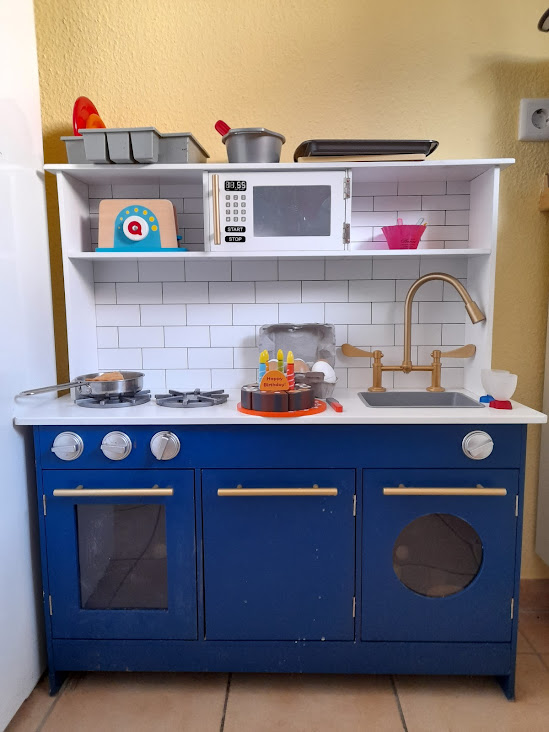 When Lyons Cub was 1.5 years old, he got his blue, wooden toy kitchen. At that time, he was too young yet to engage in social play, but he got the first sensory stimuli by opening and closing the cabinets and turning the wheels to “regulate the temperature” (they make a nice cracking sound, too). He learned to put pots, pans, plates, and plastic cutlery inside the cabinets or to take them out. He was too short to reach the counter for playing with the top of the stove. At this stage, he learned the basic kitchen vocabulary, even if he didn’t talk much himself yet. He was just tall enough that he could turn the faucet on and off when standing.

Just a year later, all this posed no problem to him anymore. He engaged in pretend play and started to prepare me breakfast and dinner with his toy foods. Moreover, his toy kitchen was now placed in a nook in mommy’s real kitchen, so he could cook simultaneously with her! He has a lovely wooden toaster from Melissa & Doug, into which he can insert two wooden slices of toast that he can make pop out with the lever on the side. He also uses pieces of butter that attach with Velcro to the toast or to each other. With the included butter knife, he can cut through the Velcro and separate the butter pieces. He has a rack full of steel pots, pans, and a skillet. For a sponge, he uses a real-life Scotch kitchen sponge from mommy’s kitchen to clean up his toy kitchen. There’s one thing I don’t like about this pretty kitchen: the microwave door falls off constantly. It came with tiny screws for the hinges, and I’ve replaced them with longer nails in the meantime, but the thin wood is split already and they don’t hold very well. We try to use it seldom.

Another year later, at 3.5, Lyons Cub is already preparing elaborate dishes with fruit and veggies from his little wooden supermarket. He doesn’t just bring me a piece of plastic cake; no, he puts it on a little plate, adds a knife, and carries it carefully to my table, watching happily while I “eat” it. He also knows what’s healthy food and what’s unhealthy, because he likes to watch Om Nom on his chromebook. Thus, he brings me veggies from his toy supermarket. I get to eat broccoli almost every morning for breakfast 😉 In addition, he has four baskets full of wooden foods of the four food groups, dairy, meat, fruits and veggies, and breads from Melissa & Doug.

Here, Lyons Cub is baking a toy cake for mommy; that is, until she gives him a REAL package of muffins to play with–from then on, he is focused only on baking edible muffins, so Lyoness stopped the movie to start baking with him. The product was delicious. The process is something I will spare y’all here (you already know what it looks like when Lyons Cub is baking)… if you want to see a movie, leave a comment for him in the comment section!! Maybe I can convince him to make one for you 😉