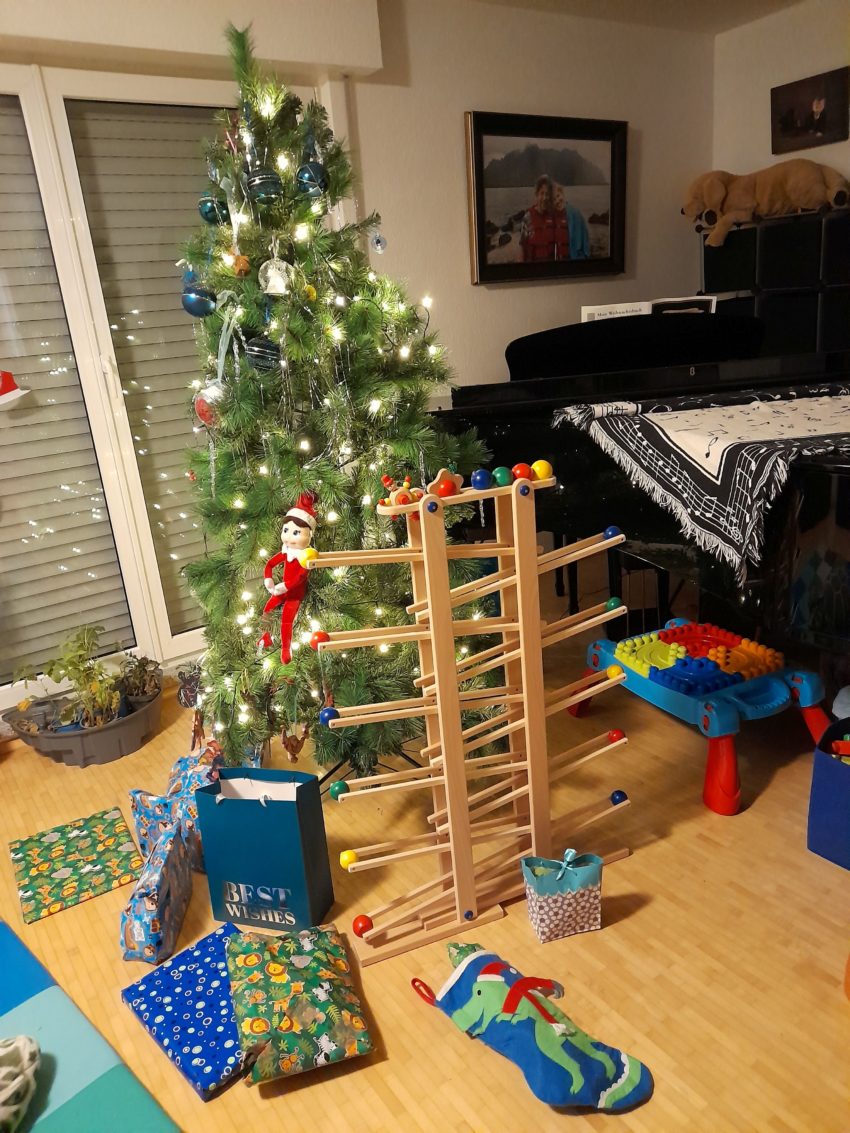 The Trihorse “Marble Run” (“Kugelbahn“) is actually not for marbles, but for big wooden balls and figurines, and it would make a beautiful birthday or Christmas gift (just a hint, dear grandparents!). Lyons Cub has the big one, but there’s also a smaller one (50 cm) available from the same company that one-year-olds can reach. The tall one (1m high) is for older toddlers, but I would recommend getting the bigger one right away, so your child will use it for a long time. It’s definitely worth it! Even grandparents and parents have fun with it!

It’s not comparable with those cheap plastic marble runs; the former is much slower and straight forward but of a much higher quality and has exciting figurines to race against each other (we have twin clowns, a hedgehog, a horse, a red flower, a wheel with four metal bells, two customized trains (an engine with his first name, and a wagon with his last name), and the red/green/yellow/blue wooden balls it came with), and the latter are more sophisticated regarding obstacles. The wooden race can be used by younger tots, too. It has two sturdy feet and won’t topple over, while the plastic runs are very fragile construct your kid cannot put pressure on or lean against. If you want something beautiful and wooden for your Montessori child’s room, the wooden track would be a good investment.

It would be a great acquisition for the waiting area of a pediatrician’s or children’s dentist’s practice, and it would make a wonderful daycare toy, too. Lyons Cub saw the wooden ball track for the first time at his pediatrician’s office when he went in for a viral infection at 2.5 years of age. It was almost impossible to get him out of the practice, and he always wanted to come back and talked about the wooden track non-stop. When, a few months later, we returned for his 3-year-old’s appointment, he was so disappointed that he was seen in a different office that did not have a wooden ball track! Thus, since Christmas was coming, he received a similar track for the holidays. He saw the big, slim box standing under the tree for a while and kept asking, “race track?” with lots of hope in his voice.

And there was his race track! Even grandma loves to find out which of the wooden toys are the fastest runners. Spoiler alert: the blue hedgehog is the fastest, then the horse, then the trains, the balls, the flower, and the wheel with the bells is the slowest. The balls and the flower were included with the tracks. The rest I bought separately, and I will acquire a few more for the upcoming holidays this year. They are just so neat and durable. I hope my grandkids will inherit them some day 😉

When you order the train, you can have it customized. I had my son’s names put on the engine (7 blocks) and the wagon (6 blocks), and since one letter block was left blank, I had a heart inserted there. This alone would make a great nursery room decoration until kiddo is big enough to play with it! A baby can play with the train on the floor, too. You can attach the engine to the wagon with a little cord and a red ball that it loops around.

I think the track and the many separate wooden toys you can choose from would also make a great baby shower gift! The racing toys are expensive enough to make a gift per se. Your little one will spend many minutes watching them rolling down the track. What a nice occupation on a quiet afternoon when there’s not much energy left, because it has already been spent on a playground 😉 We use it as calming down technique shortly before grandma has to leave for home. It’s quite mesmerizing.