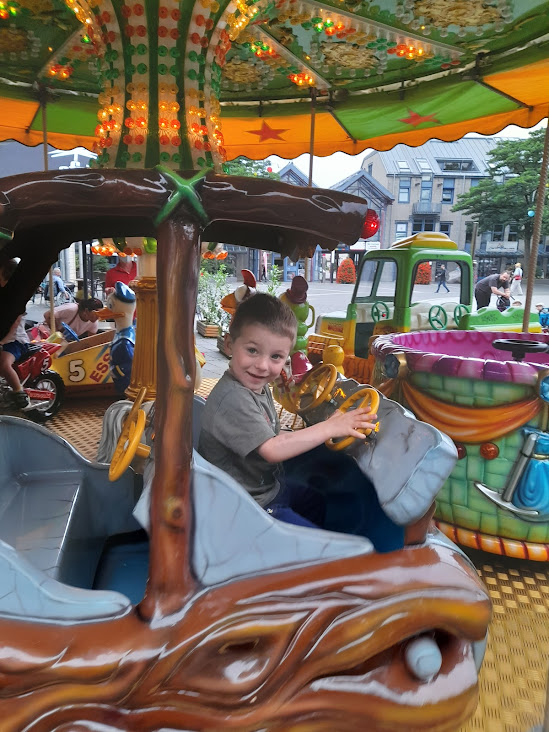 The funfair is in town! No, not the Largest Fair at the Rhine River banks in Düsseldorf; this would be a number too big for my toddler, and I would fear losing him in the masses–just a local small one with one merry-go-round and some food stands, where you can buy brats, candy floss, gingerbread hearts, love beads, and roasted almonds. There were lots of kids present, so it was much more fun than riding the ride-on cars at the Mall.

It’s summer break, Lyons Cub has said bye-bye to his daycare, since he’ll go to the big kids’ kindergarten in the new school year, and we have time to explore the city and surroundings. The weather is damp and humid; the recent flooding in Germany has led to the closure of some areas (including the playground my son wanted to go to, which was blocked off by a red-and-white ribbon spanned between trashcans), so we’re off to the city center and stumble upon the merry-go-round by surprise.

The first things we get are a bottle of love beads and a gingerbread heart that says, “Prinz” (“prince”). Mommy is munching roasted almonds, which Lyons Cub will only get to taste after he has turned five years old, because little kids can choke on them, just like on popcorn, so I’m extra careful. By the way, the Band-Aid on his left hand is for a fake boo-boo! We had to go to a pharmacy to get him new Band-Aids, because we had run out of his favorite monster Band-Aids at home, and they only had some with Mickey Mouse on them. Thus, he proudly parades his imaginary wound 😉 It didn’t stay on for long. I wonder where it went. The last monster Band-Aid was rediscovered on the sole of grandma’s sock…

Then, Lyons Cub gets to choose a ride on the merry-go-round. One ride costs EUR 2.00! It’s quite expensive for a few minutes, but you can’t weigh a kid’s joy in money. He picked a safari jeep, a kettle that turned around itself, and a race car to ride on. Many rides had a horn, and the kids were honking frantically 😉

Here, he is on the Safari Jeep:

Then, he tried out the kettle with another boy, slightly bigger than he. I don’t think that was such a good choice, because he got a little dizzy when this thing turned around its own axis 😉 Oh well, little kids don’t feel it as much as adults. Lyoness would definitely not go on those rides anymore! It used to be different in my youth. I used to live in Düsseldorf in my late teens, and of course my siblings and I went to the largest fair on the Rhine!

The final ride was a yellow race car. After that, mommy ran out of 1-EUR coins and we continued our trip through the city center, at the end of which we managed to buy our groceries before the rain set in.

1 thought on “… Go to the Funfair With Your Toddler?”