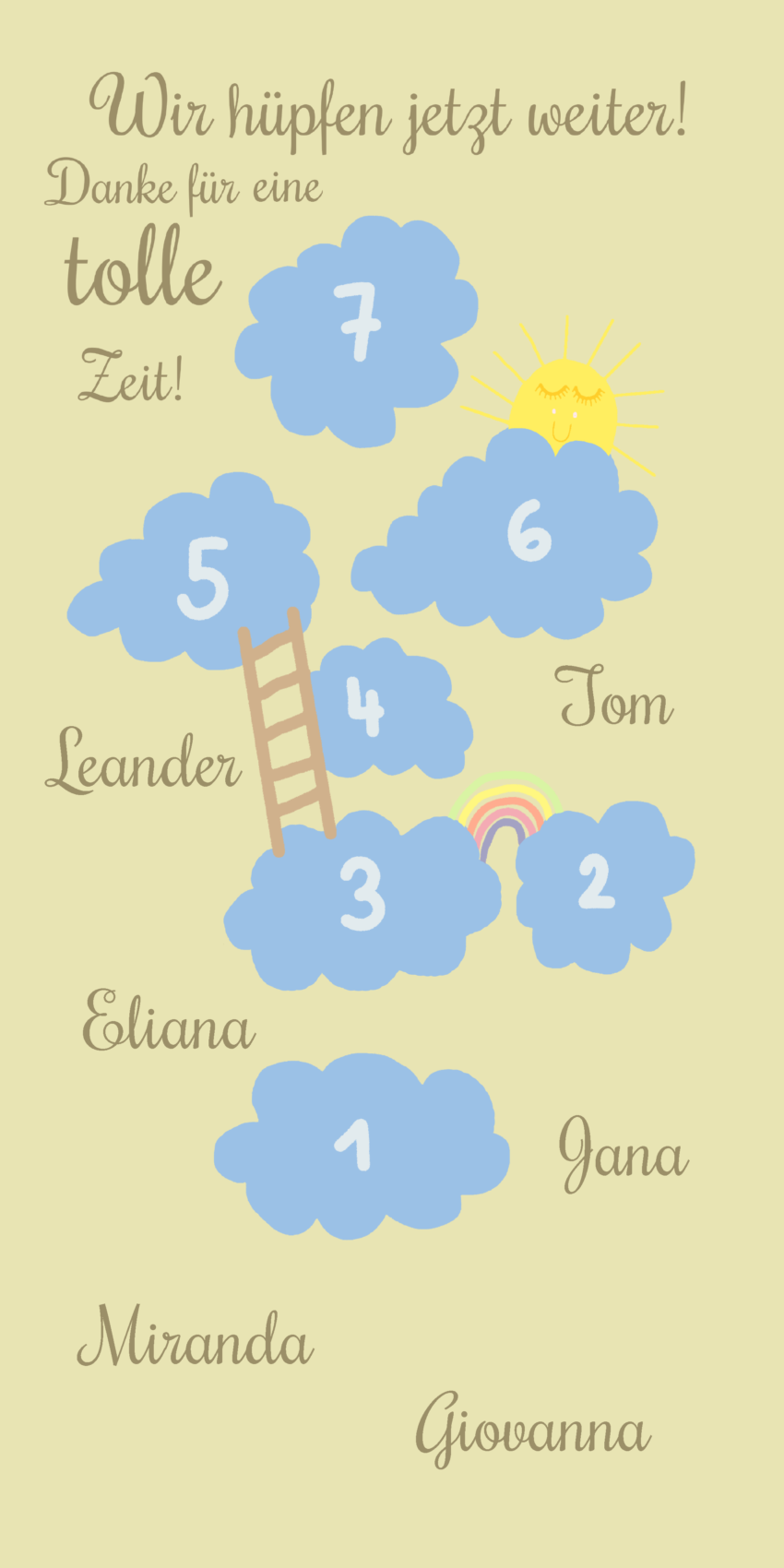 Lyons Cub has three more weeks in his current daycare, “Land of Clouds,” where he has been since August 2020. At three and a half years of age, he “aged out” and will go to the big kids’ kindergarten after the summer break. As much as he’s looking forward to being a big boy and having a huge playground to run and climb around and many children to play with, he is going to miss his small, contained, Corona-safe environment with the few children he’s accustomed to and his two nice and friendly teachers. Therefore, we’ve been thinking about what we could offer his two daycare moms as a farewell present.

At first, we thought about the obvious: candy for the daycare moms and soap bubbles and colorful chalk for the children. But that’s a bit boring. Probably every parent is going to do that. We can do that in addition, but I was really aiming for something more memorable. Besides, Lyons Cub has been kind of a difficult toddler sometimes, as he has had some, ehem, temper tantrums which led him to throw around with fabric cube organizers and explore the inner life of a 90 bucks teddy bear 🙁 In this video, you see Lyons Cub innocently lying in his little bed, with cubes thrown all over the place:

And this is Mr. Teddy, who, during one fateful nap time, fell victim to Lyons Cub’s curiosity and scientific research of “inner organs,” which didn’t exist, to his disappointment (he has a doll called Erwin with a zipper, and when you open it, you can take his intestines, lungs, stomach, liver, bladder, kidneys, heart, and even appendix out, kind of like this one — so maybe it was my fault, after all).

So, yeah, we definitely owe them something. (I had made Lyons Cub buy a plush doggy, since we couldn’t find a teddy, and offer it to his daycare mommies with a big excuse.) Also, he had made nice memories, like throwing around with foam blocks and playing in the ball pit:

I was thinking about a gift with the names of all his little friends on it. Something everyone could use. And since they have so much uncovered laminate floor, it seems like a carpet or floor mat to play on would be a good idea. Then, I came upon this link of a company where you can design your own floor mat for a daycare as farewell present, for when your kiddo moves on to preschool or school. One can either custom make a mat or pick one from their vast array of beautiful templates:

That was exactly what I had in mind! The kids could play hopscotch on it, or sit on it when doing their arts and crafts, or playing with their toy cars. It’s not harmful for kids with allergies, and it is so thin that it fits well underneath a door. And since his daycare is called “Land of Clouds,” I found one floor mat that looks cute and has clouds:

This will be perfect for Lyons Cub’s friends who stay behind. One day in the not so distant future, they’ll also move on, and then the writing on the floor mat fits: “We are hopping on. Thank you for a great time!” Then, the daycare mommies can remember them (I sincerely hope it’s not too much of a nightmare) while dealing with a new bunch of incoming babies and toddlers…

The count-down is on…

We can’t wait to see their faces! By the way, if you want to custom make a floor mat or door mat, for example with your advertising, your mom blog logo, the IUGR logo, your pet’s face, etc., you can do that here; it is easy and fun:

And just in case anyone wondered — Mr. Teddy is alive and well again!! The daycare mommies put all his intestines back into his belly and sewed him up. Phew…

We were so looking forward to Lyons Cub’s farewell party and handing over the carpet, but in the night to Thursday, July 15th, the drama unfolded…. Torrential rainfalls caused a huge flood in West Germany.

The rivers went over their banks. I didn’t check my What’sApp; otherwise I would have found a message from kindergarten around 11 p.m. saying they were flooded and had to close until the start of the new school year. Thus, Thursday early morning, I drove through the mud and delivered my son to kindergarten; when we were walking down the steps to the backyard basement entrance of the KITA, there were sand bags, and Lyons Cub would have stood knee-deep in pooled water. I lifted him over the sand bags, and he knocked on the door–only then, it occurred to me that the basement was flooded and kindergarten would not take place. I had to take a day off work, because I could not find a caretaker at such a short notice (grandma was still sleeping). Lyons Cub cried, “No party???”

The next day, grandma lion slept over at our place and took care of Lyons Cub while mommy went to work–she heard horror stories from her colleagues, some of whom had had 1.5 meters of water in their basement and no electricity, warm water, and Internet for two days. Others couldn’t get there because the roads were flooded and closed, even the autobahn. The fire-engines couldn’t get to all households fast enough to pump out the basements, so many people were on the roads with garden hoses, brooms, and pumps, pouring the water onto the streets. Hospitals and nursing homes had to be evacuated. I had to drive through mud and saw several abandoned cars piled up in the grassy middle circle of a round-about.

The floor mat came around 11 a.m. on Monday morning, July 19th, and Lyons Cub was excited to unpack it. After the basement of his KITA had gotten flooded, which destroyed the floor and existing mats, a new, dry mat was maybe a welcome gift right now.

What’s cuter than unpacking videos? Here, Lyons Cub is struggling with the carton to get the floor mat out. He says, “There’s a carpet for you!” Then, he continues in German, “Können wir ihn ausschütten?” (Can we pour it out?) This didn’t really work, because it sat just too tightly in the package, so he ended up tearing the box to pieces.

And here, you can see the finished floor mat. It was beautiful! Light beige in color and with pastel blue clouds for the “Land of Clouds.” I hope the future KITA kids will just walk and hop on it wearing socks, not dirty shoes 😉

We met Lyons Cub’s two daycare mommies on Monday afternoon, and he proudly handed over a goodie bag and the carpet. His teachers loved the gift, because it was so personal with the names of their children on it! Lyons Cub received a farewell present, too. He was in heaven! He could barely stand still for the farewell photo, because he always wanted to get his hands on the bag (he had spotted candy in it):

Full of suspense, Lyons Cub opened his bag in the car on our way home, and next to candy, stickers, a Paw Patrol fan, soap bubbles, and chalk, he found his most recent drawing in it. Mommy will keep this one as a memory:

It’s bittersweet to leave daycare behind, but it’s also wonderful to witness the next step in the life of my “big boy” 🙂

1 thought on “… Create a Floor Mat for Daycare as Farewell Present?”