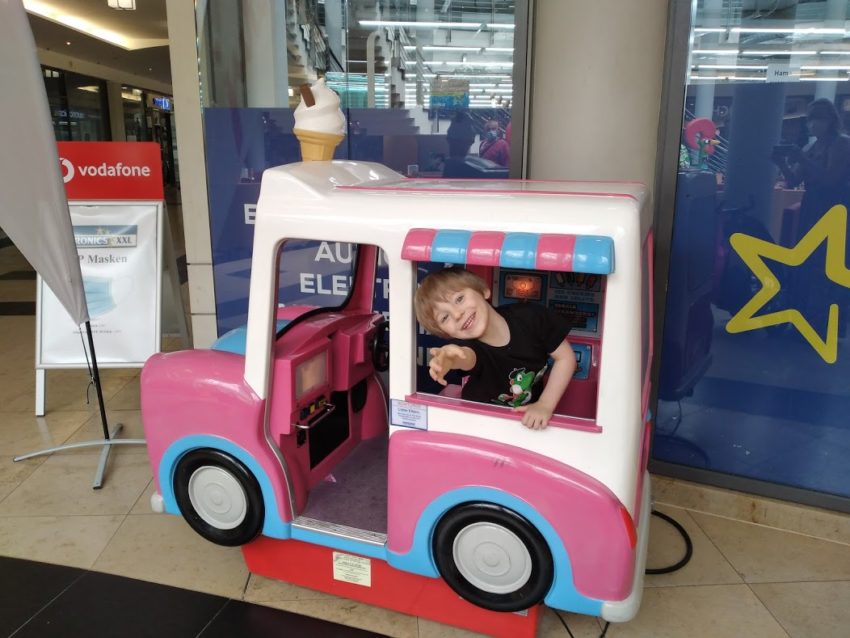 It’s in the middle of summer, school break has started, but kindergarten is on and mommy has to work, so long day trips or vacations are still a no-no. Lyons Cub is getting bored, so what’s better than to take a trip to the Mall to take a ride on the ride-on machines? Lyons Cub loves the ice-cream truck. This is probably because his currently favorite show, Blippi, has an ice-cream truck episode. There just happens to be a similar pink ice-cream truck in the Mall with four different kinds of ice-cream buttons to click on. It has the extra cool feature of a display showing the other cars on the road, so when steering it, kiddo can try to avoid the other cars.

We always do pretend play; mommy stands outside the window and orders strawberry or chocolate ice-cream, and Lyons Cub delivers the wishes. I pay with hard cash (to keep the truck running)…

Naturally, mommy wears a mask, which is obligatory for entry, and is also twice vaccinated. There were no other kids in sight, probably due to the summer break, so I considered it relatively safe to go out to the Mall (he had a good bath afterwards, and a mishap bath in between–yes, you see right, Lyons Cub is wearing flowery girls’ pajamas with ruffles! We went to the Mall first, to kill time before our hairdresser appointment started. Then, he had his haircut, and afterwards, he played in a fountain and fell into the water (of course!!), so we went into the next best store and got something dry to wear, and that was all they had. Then, it was back to the Mall for more fun!).

At some point, the ice-cream truck lost its appeal, so it meant off to Bob the Builder’s truck. There was a big Bob standing behind the cabin door. He had a blue kitty in his shovel.

Afterwards, we went to a minions’ space ship, and that was the last stop on our trip to the Mall. Another afternoon was filled, mommy and son were both happy, because the chores got done (two haircuts), we bought some clothes (planned and unplanned ones), and my son had enjoyed his pretend play! It can be so easy to make kiddo happy…

A couple of days later, his kindergarten was flooded and had to close until the time of restart after the summer break, so Lyons Cub missed his farewell party ;( Therefore–what else could I do?–mommy took him to the Mall again, this time to ride the merry-go-round. He had so much fun inserting the coins through the slot and jumping on a horse really quickly, while it already started turning! He even got a free ride, because there were three horses, and one mommy with a 5-year-old boy and a two-year-old girl had put three coins in, and he was allowed to jump on and mount the third horse. Oh what fun!

Upstairs, on the first floor, there was an interactive fire truck. It had a display in the windshield that showed multiple windows that opened and closed; some had faces in them, and some fire. When you pressed your finger on the windows, you could spray the fire down (or spray the people into their faces). Lyons Cub figured out quickly how to extinguish the fires. Watch my little fireman:

Thus, if the weather is bad or you don’t know what to do with your toddler, and there’s a Mall anywhere near you, that might be a pastime worth while. Take along a wallet full of coins. Now, if you can refrain from going shopping at that occasion, it might even be a CHEAP pastime 😉