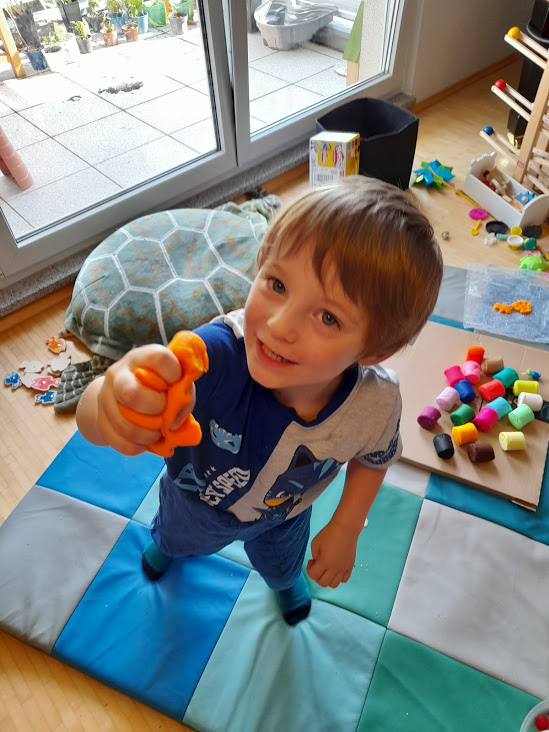 It’s self-explanatory–playdough is one of the best sensory toys that helps children grasp different shapes, textures, colors, and names of their constructs that I can think of. It exists since the 1930s and was originally a cleaning substance for wallpapers, and its popularity as a children’s toy rose dramatically in the 1950s through television ads. When is your toddler old enough to play with playdough? As soon as he or she doesn’t put it in his/her mouth anymore to eat it, I would say! Lyons Cub started with it around the age of two.

He got Chase’s blue police car from his beloved Paw Patrol as a present, and it contained a canon for playdough. The following video shows how he used just the canon, which can be taken off the truck, to make “push push” to create a long, blue playdough sausage. His learning process as a two-year-old is shown very well, too, because he wanted to insert the rammer the wrong way, but it was too big and wouldn’t fit. He self-corrected nicely:

Here, Lyons Cub is three-and-a-half years old already and is able to explain in his own words what he is doing. You’ll notice he’s bilingual when he’s mixing English and German (“Wurst” means “sausage”) and gets his word order wrong: “Mama, put the playdough in the bottom, and press, and put your finger out. Then, make–put that in here at the bottom. Then, you need this and press, and the Wurst comes on the top out! Then, you take the gun. Then, you have this Wurst!”

In the meantime, he has accumulated different cutting tools (including mommy’s Christmas cookie cutters!) and a regular supply of colorful playdough, and grandma has helped him to create balls, snakes, snowmen, and other figurines. They never live long, which is the point of the ever-changing nature of this game. Sometimes, we let his cut-out shapes harden in the air, but he never shows much interest in them anymore when they become unchangeable. We did do his hand and foot prints in playdough, and he loved those!