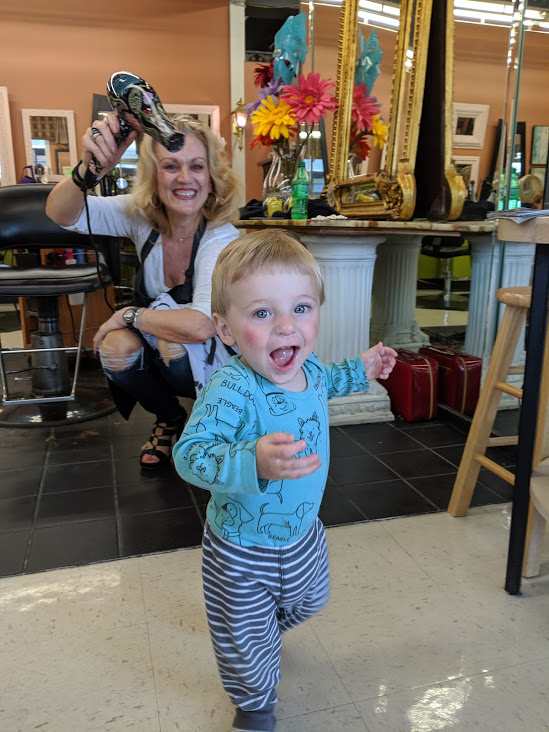 Going to the hairdresser is something special. Ideally, it’s a place where you can also talk and gossip and have some fun while getting your hair done. But with a little kiddo in tow?!? Will there be tears when the scissors approach baby’s locks? Will there be screaming when he has to release his grip on a pair of scissors? Will he crawl through the cut-off hair and end up covered like a hedgehog? Mommy’s fears of going to the hair salon with her little one are not unfounded…

When Lyons Cub was a baby, we had a wonderful hairdresser in Hopkinsville, KY, Michelle at Juanita’s Beauty Salon. She was from a German-stemming family like we were, and our nanny Nancy had introduced her to us. My son actually met her first when he was still an infant and didn’t need a haircut yet, but he witnessed mommy and nanny get their hair done nicely.

Michelle cut my son’s hair when he couldn’t even walk yet. I would be allowed to pump in a quiet room while he crawled through the salon, was allowed to chew on a cleaned comb, and played with the hair stylist. His first haircut was when he was 10 months old.

Lyons Cub’s second haircut happened when he was 13 months old:

When he was that little, I didn’t need to distract him yet, because the hairdresser did everything for me. She entertained him and kept him in a good mood. In addition, I had my pumped milk in a bottle for him, if he became too impatient. He wasn’t scared at all. She even saved some hair from his first-ever haircut for me in an envelope, and I used it later on to get a necklace done with breast milk jewelry and enclosed baby hair.

Once he was over one year old, the problem was that he wanted to crawl or walk everywhere and touch everything. The hair stylist needed to put her scissors and other sharp or liquid materials out of his reach. She still went along and played with him, gave him smooches, and chased after Lyons Cub with her fan. He ran away from the hot air and had, literally, “a blast”!

When Lyons Cub was about two years old, we tried out another German hairdresser, Kerstin at Shear Grace Hair Salon in Woodlawn, TN. She was also very friendly and patient with him, but he didn’t hold very still anymore. A mom hack is simply to hold your cell phone under kiddo’s nose with his favorite show. Lyons Cub was a fan of Paw Patrol at that time, so that was it. He was so fixated on the phone that it was relatively easy to cut his hair. He also took more interest in the cape he was wearing. He did not like the water sprayer!

In 2020, after a long Corona break with REALLY long hair, Lyons Cub had to be bribed with coloring books in addition to videos to sit still and be occupied. His hair had been so long one could make a piggy tail! It’s not so much the time he is under the scissors that’s difficult, it’s the time mommy gets her hair cut that becomes a problem. When mommy is fixed on her chair and can’t chase after him, he needs to be buckled into his stroller and have something interesting in his hands, and then it works:

Now that he’s a big boy, he greets the hair stylists, sweeps the floor (when they let him), looks at all the dryers that seem like big, silver robots to him, makes faces in the mirror, and touches things he’s allowed to touch. He also runs around if he’s not stopped, but he has respect for the hair stylist. We are still using videos, plus talking and explaining what is being done. And Lyons Cub really likes his looks afterwards!