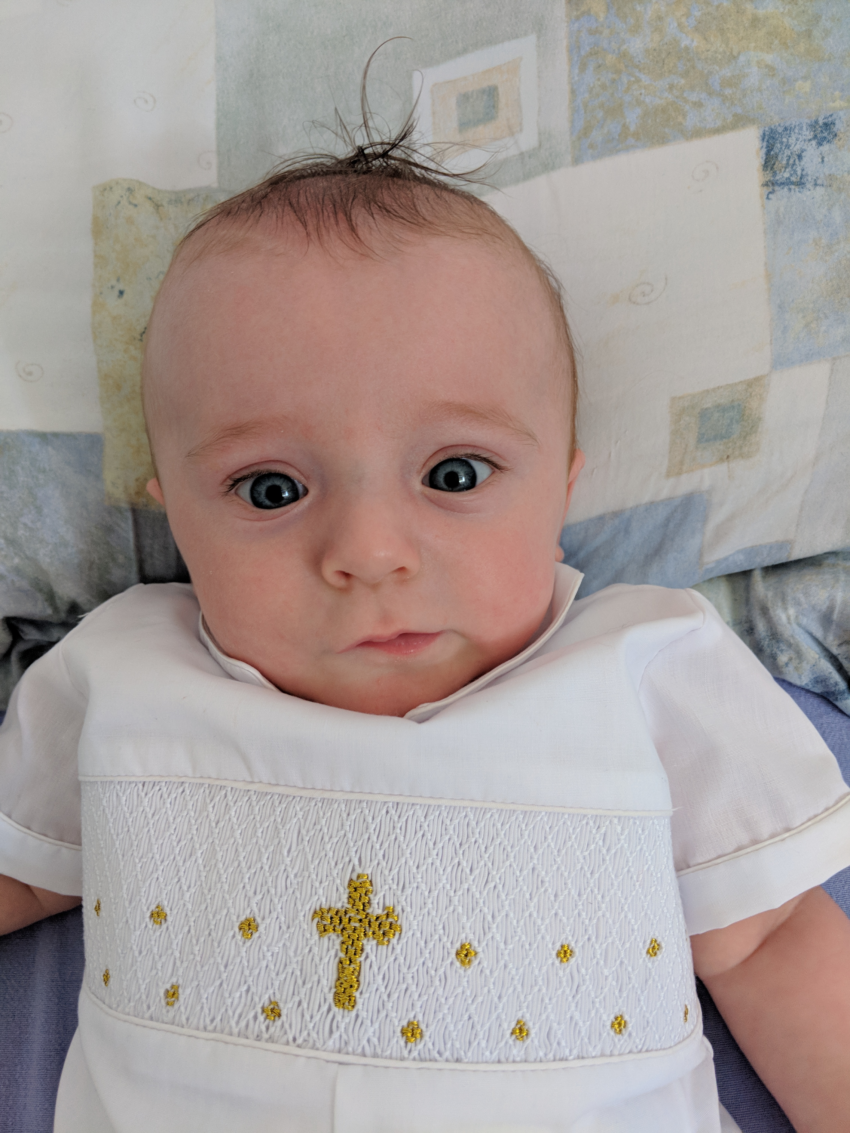 David, my late husband, was from a Jewish family, and I from a Catholic one. Neither of us was devout. We had discussed prior to his death that, whichever religion we chose, we would educate our child with an open mind, so to say as freethinker, so he could choose when he was older which tradition he wanted to follow, if any. Tolerance was very big in our interfaith family; we abhorred fundamentalism. On the one hand, we did have a Christmas tree and celebrated with my friends (and my husband played the piano when the organist was unavailable at University Baptist Church (UBC), where I sang in the choir), and on the other hand, we went to music events in the synagogue. My husband could not read Hebrew, and I remember a funny incidence when he held a hymn book upside down, and I, a goy or gentile, had to turn it around for him.

My husband was not practicing Judaism. He did not believe in life after death, although he would have liked to believe that inanimate matter continues in some form, and that a soul can live independently of a body. After he had passed, I wanted to give our child a foundation in a faith that would help him cope with the loss of his daddy. In the Jewish faith, I did not find the comfort regarding life after death that I would have liked to give our young son. Therefore, I educated him in the Christian belief of a heaven (due to Corona, we didn’t go to church often), but still bought him Jewish children’s book to keep him open for other world views and religions, should he feel a need in the future. David had had just one wish: “I don’t care about his religion, as long as he becomes a good person!”

It seems to have worked with the consolation part of it; when my son, then three, approached another kid’s daddy on the playground, he said: “My daddy is in heaven, behind the white cloud there!” Right now, he believes that we cannot see daddy, but he can see us, and he is in a good place where we one day will meet him when we are old and going to die. He is not afraid of death.

My German family is Catholic; in fact, my mother had been a nun in her younger years, and one of my sisters married into a Polish-stemming family, also Catholic. Since I had planned eventually to relocate to my family and return to my “roots,” I thought baptizing Lyons Cub in Europe where my relatives could be part of the ceremony would be ideal. It would have been both impractical and costly to make them all fly to Nashville airport and stay at our little house in Clarksville. Thus, in the summer of 2018, when my son was six months old, we took a plane to Düsseldorf and booked an appointment in the church near where my sister lived, who was going to be his godmother.

It took some paper work in advance, and we met with the friendly priest for a preparation talk a few days before the event. The baptism gown, a beautiful, white lace dress, was a family heirloom that I once had gotten for my sister’s oldest child, a girl; it was handed down to her younger brother and then to Lyons Cub. Under the gown, he wore a hand-smocked baptism suit with a golden cross and a bonnet. I had gotten white socks with a cross and white baptism shoes to go with it.

For every baptism, there needs to be a candle (“Taufkerze“); my then 8-year-old nephew had gotten a blank, white one including some golden wax paper, and he had carefully cut out the letters of my son’s name. He even added a cross, a comet, a moon, and lots of stars! He proudly carried it through the church when it was lit.

There were three baptisms on the day we had ours; the other two babies were younger than Lyons Cub, but much quieter; he just looked like a newborn due to his IUGR; alas, he cried the whole time and just became quiet in silent bliss when the baptismal water hit his head, for it was a very hot summer day, and he had already shed his shoes and socks and was still sweating (no air-conditioning in Germany)! My sister’s daughter had wanted to be a god-mother, too, but for that to have happened, she would have had to be 14 or older, and she was only 11. However, she was so proud that she was allowed to hold him, too, even if she wasn’t a god-mother on paper!

After the ceremony was over, Lyons Cub enjoyed a delicious bottle of breast milk in the pew, and all the tears were forgotten. It was also time for a fresh diaper, after all the excitement! I took off his baptism suit, and he was just in his white onesie, which was perfect for the hot weather. By the way, the Russian inscription on the the wall reads, “Therefore to him that knoweth to do good, and doeth it not, to him it is sin.” (King James Bible, James 4:17) (Кто ну же знает делать добро и не делает, тому грех. (Иакова 4:17)) May this be my son’s motto for his life!

After the ceremony, we were off to a restaurant at the Rhine River with our guests. This was a wonderful end to a meaningful celebration, connecting us again with the European part of our family, whom we mostly saw on Skype. The children of our family and friends wrote “I LOVE U” for Lyons Cub with mussel shells in the sand of the Rhine River banks. There is nothing more wonderful than to have a loving family and friends!