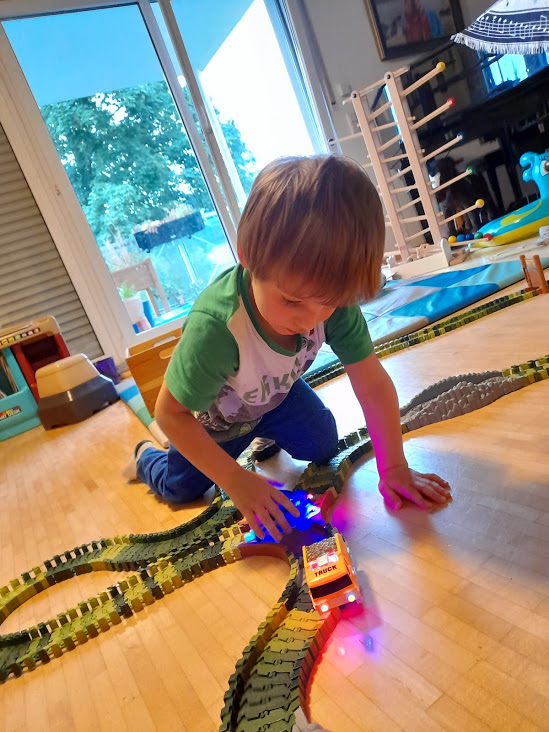 As a mom, you have to get replacements for certain things your toddler loses. Otherwise, there will be big crocodile tears. (Well, nothing ever gets lost; it just gets misplaced, right? That’s not much of a help, though, if you don’t know WHERE it got misplaced.) For us, it was the cars from Lyons Cub’s dino race track. Where could they be? All four of them have vanished, a red one, a brown one, and two green ones. We looked under the furniture, in the corners of the room, in all the drawers and cubbies and boxes… they were nowhere to be found. Did he hide them somewhere? Did mommy put them away, so they would not get lost (ehem)?? No tellin’. Lyoness had to get replacement cars!

And those are even more loved than the originals. They have LED lights and were originally meant to light the glow-in-the-dark race tracks. Lyons Cub likes them on his dino race track, too, and he lets them run wild in the room without race track, as well. These cars work on most car racing tracks, such as Twister Tracks and Magic Car, etc. They are super powerful with 2 new AA batteries, and they keep him on his feet, chasing them around. He and grandma can be occupied for quite a while, sitting in opposite parts of the room and letting the cars go between each other.

We got a four-pack: A fire-engine, a police car, a dump truck, and a bus. As you can see in the close-up, they look very detailed and realistic, especially the dirt on the dump truck. The fire-engine and the dump truck have a button on their tops to switch on the light, which is very easy for younger toddlers to use. The bus and the police car have a tiny, black on-and-off switch underneath their chassis. This is a bit more challenging for toddlers to turn on, but a three-year-old has no problems with it.