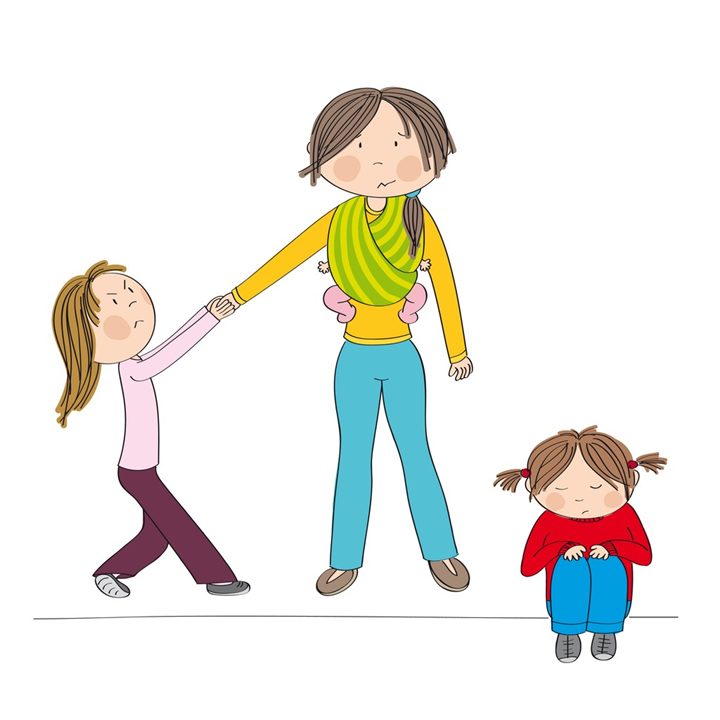 Being a single mom can be, at times, painful, scary, and grueling. It can also be genuinely rewarding and absolutely abundant in love and laughter.

My parents divorced when I was nine years old. At the time, I was very accepting of it. I had seen enough of my Dad’s abuse and alcoholism to be fully supportive of my mother’s choice to leave. I had always considered myself a Daddy’s girl, so the fact that I was so understanding of this speaks volumes. That’s not to say that I didn’t feel a deep sorrow about the loss of having our Dad close by, to tell us goodnight and make us laugh until our faces were sore from all the smiling and laughter.

At nine years old, I could see the pain that my mother was carrying with her every day from years of mistreatment from our father. So, with my sister and me in tow, our mom shifted gears, packed up a tiny fraction of our belongings, and made a break for it.

The three of us moved into our grandparents’ house while my mom got on her feet. She had never held a job in all the years she’d been with my Dad. He wouldn’t allow it. So she had to go from a place of complete dependence to independence. I didn’t really see how big of a deal it was. I didn’t pay much attention or give much thought to things, like how my mom felt back then. But now I see incredible determination and strength. I had zero understanding of the struggles she faced as she navigated the very difficult task of learning to stand on her own two feet for the first time in her life.

At the age of twenty-six, my life began to parallel hers, and I started to get my first glimpse into what she went through, as I was single, pregnant, and scared. In a frantic state plagued by fears of inadequacy, I met my first husband.

I was eight months pregnant when we began dating. Looking back, I have to wonder how much fear was involved in the rushed decision we made to get married after a year-long separation, during which time I was fully on my own with my young daughter, Laynie.

During the separation, my daughter (around one, at the time) and I lived with little food in the fridge and hundreds of cockroaches in a tiny little apartment that I could barely pay for. I remember applying for aid from the government but being told that I made too much money to qualify for assistance. Yet, I worked 60 plus hours a week and couldn’t pay my bills. I was absolutely grief stricken and felt more alone and terrified than ever. Not only could I not afford to care for myself, but I couldn’t afford to care for my beautiful little girl.

I called my sister, bawling and hysterical. I remember saying to her, “I don’t know how I’m gonna survive.” She would always remind me that I WILL survive and things do always turn around.

That day was a defining day for me. I remember it and call upon that memory often because what I did next was the best response I could muster at that moment in time. I scooped up my toddler in my arms and turned on “Don’t Stop” by Fleetwood Mac, and we danced wildly around that dark, musky, roach-infested apartment. The despair began to lift away, and all that was left was love and joy. I didn’t have a solution. But, I decided to stop sitting in my despair.

To this day, when things begin to feel hopeless, I remind myself of how hopeless I felt that day and how I came out of it, stronger than ever. I’ve had ups and downs since then. I’d like to claim it was up, up, up and here on this plateau is where I have stayed for the last 12 years.

I’m gonna tell you right now, I am a huge believer in the power of positivity. Dancing when you want to just sink and cry creates a major shift in energy. I saw the results.

I began to focus on what was working for me instead of not working for me. Things started to fall into place. I got a really good job at a bank where I’d make better money and work shorter hours so I’d be able to see my kid more. I and my then boyfriend decided to get back together, and for the first time in awhile I had hope. I knew that I could and would survive.

But the mind is a funny thing. I have had a lifelong struggle with anxiety and depression, and so my ups would sometimes unexpectedly drop into the lowest of lows. My boyfriend and I decided to get married. He was at Boot Camp for the Army and would be stationed God knows where. So it seemed like the only viable option at the time. During our five-year marriage, we had our second daughter, a little ball of energy.

You might expect that this would’ve catapulted me right back into the depths of being a single mother again, trying to figure out once more how to stand on my own feet without any help. That would have been the better choice. Instead, I was quick to jump into a very fast-tracked relationship with a new man and married within a month of the divorce being finalized.

Two months after we said, “I do,” I was once again pregnant. Another daughter! My second marriage fared far worse than my first. Just after our daughter’s first birthday, my husband informed me that he no longer wanted to be married to me.

I was crushed. Completely and utterly crushed.
On top of the pain of trying to mother three children when I was in utter shock and fully engrossed in the darkest, deepest despair, I also had no car and no income.

Sigh… here we are again.

I felt so awful about my life. I felt so ashamed that I had lost every shred of my independence and was now a single mother of three children. Three!

I have never felt more sorry for anyone than I felt for myself at that time. I had been emotionally abused, blamed, discarded and replaced in a matter of months.

How could this have happened?

I blamed myself. I should’ve been better. I shouldn’t have stood up to him. I should’ve kept the house cleaner and disciplined my kids the way he said I should. I should’ve tried harder to lose the weight after I had our child.

Today, I am still a single mom. But, the negative connotation I once felt in that title is gone. I have been a constant in my children’s lives. When everything else around us seemed to be falling apart, we have stood together.

Do I still struggle to make ends meet? I do. But, this is the beautiful thing. I’m taking steps. I take one step at a time. Today, I have a car, I have a job, I have an apartment that is not swarming with vile mobs of roaches.
I am climbing back up the ladder to my personal independence and stability every single day.

I don’t just say that I am grateful for my experiences because, well, isn’t that what we are supposed to say? I say it because I am truly blessed to have had the experiences that I have had and to know that I can persevere.
Today, I live my life with an optimism I never imagined I could obtain. I am surrounded my the most beautiful, genuine, caring, funny little girls. I am blessed beyond my wildest imagination.