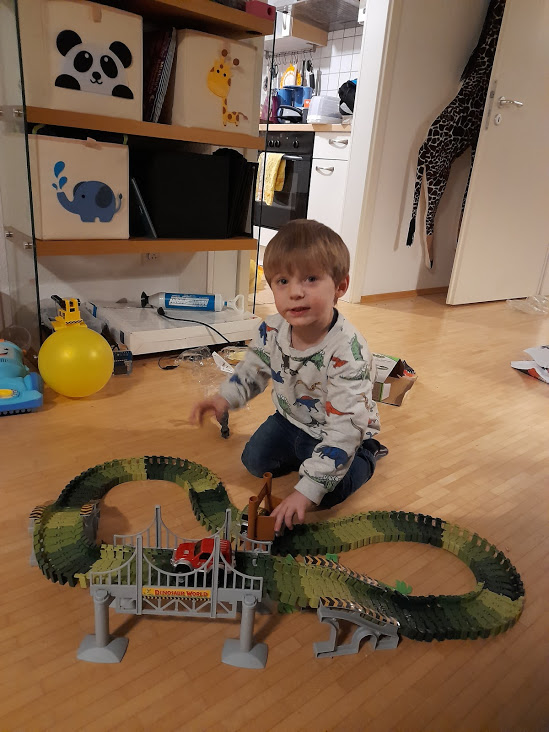 What better birthday present could there be for a 3-year-old boy who loves dinosaurs and volcanoes than a dinosaur race track with battery-driven race cars? Lyons Cub had lots of fun seeing whether mommy’s red car, his green car, or grandma’s brown car made it longest on the tracks without escaping, getting stuck in a gate, or disappearing somewhere in the room, just to be stopped by a furniture item.

Mommy was smart and bought a battery charger, because after four hours of play, your batteries will be empty. But let’s face it — if you got a wii (like we do) or any other toys that use batteries, you probably should invest in a battery charger, anyway 😉 And we can tell you a secret: this toy is fun for the adults, too! Look how grandma Lion enjoyed herself:

You can make various configurations and change where the cars are going while they are already running their race, so that’s fun. The little trees are totally stupid! They don’t stand on their own and cannot be fixed to the race track. Might as well not have sent them along. We tossed them right away. The cars are awesome; just put one AA battery in each one and let them run, either on the race track or through your house! In the pictures, you see what ONE dino track looks like. Imagine what it’s like if you combine two or three tracks!

The tracks easily snap together (for adult hands, or older kids), and you can combine different brands of the same toy with one another to add various colors and functions, like tunnels, dragons, cars with light, etc. Some of the dinosaurs are big, but with the second track, we got a handful of tiny ones that are practically unusable. I put them away. They would have become vacuum cleaner food at some time, anyway. Lyons Cub has many other, bigger and just as realistic looking dinos to combine with the two that come with the tracks.

Warning: The cars go awfully fast when you put brand-new batteries in. They are just too strong and reshape the race track by pulling it in different directions. They work best with half-empty batteries; this way, they will stay on the tracks and not break out and race through your living-room into hard-to-reach places 😉 We liked this dino race track so much that we bought a second one with slightly different components (it had tunnels), in order to create a mega track and have four cars. The longer, the better.

Lyons Cub’s favorite part is the gray bridge; he has four of them and stacks them on top of each other, creating arms on the side–and suddenly, he has a robot! He can run through the house for an hour with his bridge-robot. The whole game is perfect for teaching kids to self-entertain. There are just so many possibilities. There’s also a boulder that comes with the set that has the tunnels, and if you put it in front of a car, you can make bets how long the car will push it, and when it will get lost.