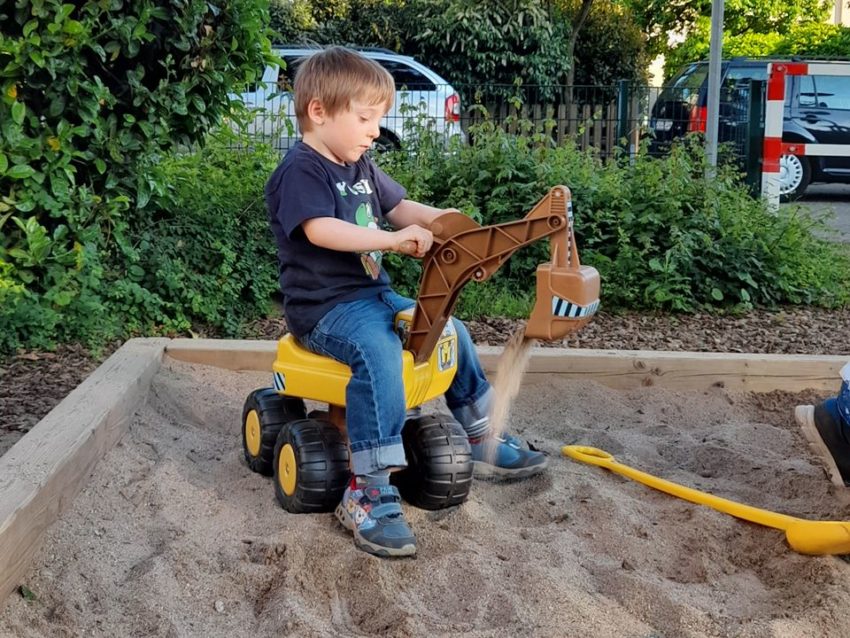 A boy and his digger… my son has plenty of dolls and non-gendered toys, but he felt naturally drawn to yellow diggers. This is probably being exacerbated by Rubble from Paw Patrol 😉 Can you relate??? Since he’s too big now for the small handheld diggers, he wanted to sit on one and operate the shovel; however, at the playground, the metal digger was too heavy and difficult for him to maneuver; it was rather made for 6-year-olds. Thus, for Easter, he got his own ride-on digger appropriate to his size. In the beginning, he still needed a second person to help with the control of the shovel, but he soon figured out how to lift it, fill it, and empty it out. His digger was the hit on the playground, and mommy didn’t mind carrying it since it is fairly small and light.

This sitting excavator has a fully movable arm with realistic shovel function and can make a 360 degree rotation. Its dimensions are 72 x 36 x 54 cm. Lyons Cub loves to turn around on it. I picked this one because it could hold a maximum load of 100 kg, so that a parent can sit on it while the toddler uses the shovel or wants to jump on the heap of sand just piled up. Other excavators hold only up to 50 kg. The only problem is when the digger stands too close to a deep hole and the kid on it leans forward, he might tumble into the hole he dug.

The shovel was even more in demand than the digger, because it is very strong, and the small toddlers were able to make bigger holes than before with their tiny sand toys. The girl loved the helmet more than my son 😉 It’s approximately 20 x 25 x 12 cm big. Lyons Cub was barely outside with his new additions, when the other kids had already taken possession of them, but they played nicely together, and Lyons Cub didn’t mind sharing. The other parents liked the pretend play and togetherness, too. The kids were engaged and peaceful.

These were the features I was looking for when comparing different ride-on diggers: