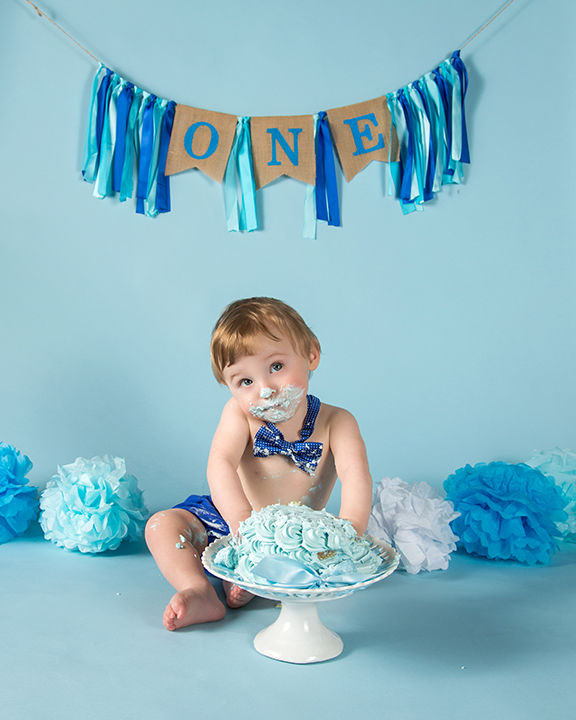 When Lyons Cub had his first birthday, I wanted to create something memorable (not for him, but for me, haha 😉 ), especially with regard to his difficult birth and IUGR diagnosis. If you have a baby of whom you don’t know whether he’ll make it, or what the outcome will be, the first year milestone is even more of an achievement. By then, Lyons Cub was in Early Intervention and had made great strides with his gross motor skills, but he couldn’t walk yet, so we didn’t take any standing position photos, just seating.

I had decided to treat ourselves to a cake-smashing photo appointment and then to a birthday party with two gay friends and their adopted daughter of almost the same age as my son. We kept it small firstly because we were new in Clarksville and didn’t know too many people, and secondly because Lyons Cub’s immune system was not strong enough yet to meet a hoard of children. He had been home with a nanny and not in a daycare the first year of his life after he had come home from the NICU, so he had not been exposed to the germs of other kids yet. That would all change in his new year of life, when we would frequent splash pads, playgrounds, the library, and at 18 months of age, he joined a Montessori kindergarten.

As a German, I had never heard about cake smashing parties before – after all, I am from Generation X and was still raised in the 1970s with the thought, “you don’t play with your food,” and at first it seemed like a complete waste and a terrible clean-up chaos to me. However, when I saw those cute photos on mom forums and Pinterest, I decided that we were going to have a cake smashing, too, since we were living in the U.S. now and had had a baby shower (actually, I had TWO!), as well. In the meantime, you can also find cake smashing supplies, photographers, and parties in my homeland.

For our cake smashing photographer, we used the same one we had for Lyons Cub’s newborn pictures, Daphne Treadway. She takes excellent photos and also has a very patient and child-friendly demeanor. I remember that at 8 months of age, when we took our half-year photos (the time babies start sitting up on their own, which took 2 months longer for my son to achieve), my boy made pee pee on me when we did the “Madonna picture” in a beautiful, blue dress borrowed from Mrs. Treadway. She didn’t mind and just laughed it away (she had probably seen a thing or two before), and she also let me pump the whole time while my son was posing in different chairs and on various, colored mats, trying on cute hats. I was producing so much milk that I couldn’t be at a hairdresser’s or seminar for more than two hours without pumping. She and her staff were very accommodating.

We had purchased the  Cherished Baby Plan, which covers three important milestones: at 4 months (which we did with an Easter theme), the second when baby is sitting up (at 8 months), and the first birthday. It also includes an additional family session in year two, but by then, Covid had hit and we didn’t leave the house much anymore to protect Lyons Cub’s fragile immune system and my lungs (I have asthma), too. We let Daphne purchase the blue cream cake for the first year session (however, the parents can bring their own cake or cupcakes, if they wish to). What I did bring were white and blue pompoms and the “happy birthday” banner, as well as his clothes. Since Lyons Cub was going to get all messy with his cake, I had just brought dark blue diaper pants and a bow tie. I chose plain blue for our “theme,” mainly because his eyes were so blue and he was a boy. Of course, you can choose a deliberate theme like, “Where the Wild Things Are” (Wild One) or Dr. Seuss, or Mickey Mouse, etc. I suggest checking out the different set-ups and ideas on Pinterest. You can also make all the decoration yourself if you have the time and talent.

Lyons Cub was very patient and well behaved, and happily dug into his cake nose first 😉 There were no tears, although he got a little tired towards the end. Daphne has excellent skills to detract baby with squeaky toys and rattles, so they look curiously right into the camera. The most difficult part is always to select some of the most beautiful pictures, because all Daphne’s shots are great, but you can only buy so many… If you are worried that your baby might get a sugar shock, don’t be, because our babies don’t really EAT the cake, they just destroy it and maybe lick a little.

At home, Lyons Cub got a homemade brownie instead of a cake, and he loved it:

This is how I prepared Lyons Cub’s nursery for his first birthday:

And here he is with his main toy, a musical learning train that he loved for the next two years:

His second toy was a pink stroller with two rag dolls, and this toy was instrumental in teaching him to walk (which happened at 14 months, with Early Intervention). Apart from that, he got clothes, baby food, and teething crackers.

And here we are together. I hope you have enjoyed our first birthday ideas and wish you lots of excitement and fun planning your baby’s WILD ONE!

1 thought on “… Have a 1st Birthday Cake-Smashing Party?”