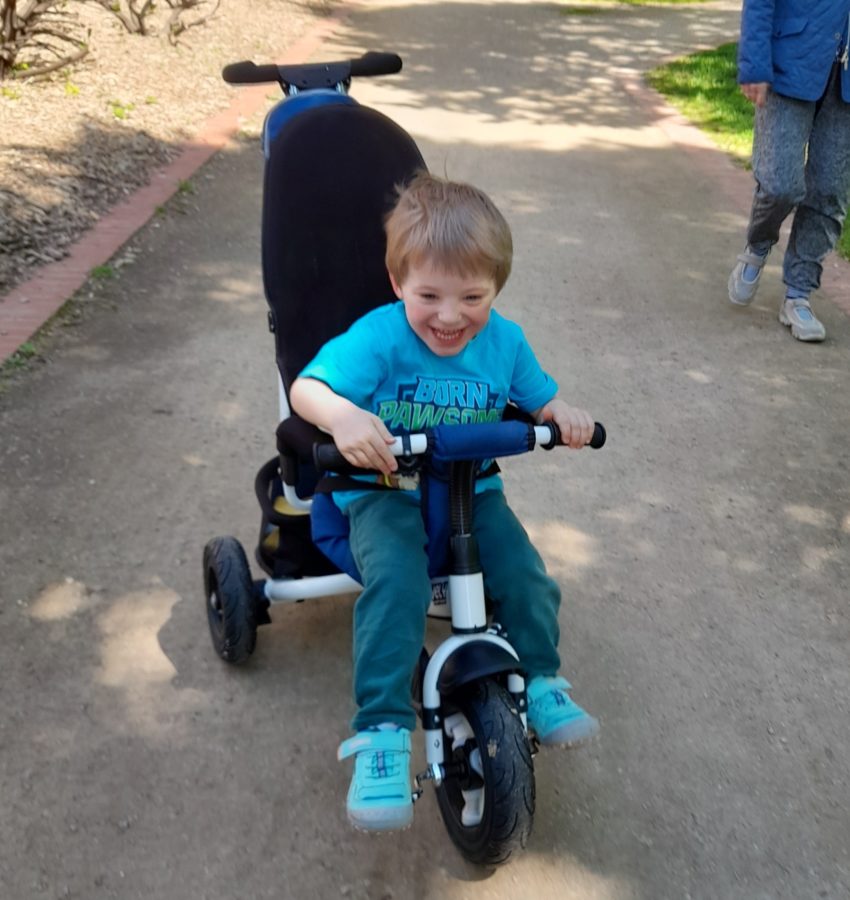 As much as any mother fears that time – toddlers become more and more independent and just want to leave and take off on their own! So we just have to swallow our hurt mom feelings and let them safely set off to explore! Lyons Cub got his Clamaro Buttler GT 4-in-1 buggy and tricycle when he was one-and-a-half. There are later models on the market now, even 6-in-1 buggies. The important thing is that it’s transformable; I liked having a buggy for when he was younger for long strolls through the neighborhood without an ordinary stroller, and being able to change it into a more sportive trike when he was an older toddler. And if you’re on a fixed budget, there are cheaper plastic versions without sun roofs available that I see a lot on playgrounds, and the kids are just as happy with them. At that age, the looks are really just for the parents.

Long-lasting driving fun is guaranteed with this push trike. It has a length of 92 cm, a width of 52 cm, a height with push bar of approx. 106 cm, a weight of 12.5 kg, and it can hold up to 25 kg. Lyons Cub, who was an IUGR baby, was only about 15 kg at age three, so he still has lots of time left with his trike. It features foldable footrests, non-slip pedals, quiet rubber tires, a strongly welded steel frame, parking brakes on the rear wheels, an adjustable sun roof with viewing window, a safety bar, a padded seat with strap, a bell on the handlebars, a small bag for the emergency diapers or a cell phone or drink, and a small basket at the rear for sand toys and other important stuff for a trip to the park or through the town.

At 1.5 years of age, Lyons Cub mostly just practiced climbing in and out alone, but had to be pushed since his feet did not reach the pedals yet. At three years old, he developed more and more self-efficacy, and soon we were able to take off the push handle and let him go by himself. Granted, the first excursions were still bumpy rides, as can be seen in the video, but he soon figured out that it’s harder to ride on grass and curbsides than on an even road. In one instance, he drove himself up on the grass, and you can hear him say, “Can you push me down here? Thank you, and now alone.” I am very proud of his self-assuredness. And if he would keep his eyes on the road instead of in the sky, he would get to his destination even faster 😉

The sun shade protects a little bit from the sun (depending on the angle), and it can be pulled down more, but we usually just leave it off. It doesn’t help when it rains. Lyons Cub wears a hat or cap for protection. The pictures below show the size difference from ages 1.5 to 3. If you have a really long child, s/he can maybe reach the pedals sooner, but my son took that long until he was physically able to ride and also logically understood how to avoid walls and corners. He learned to steer really fast. Interestingly, when he started riding on his own, he initially went backward. It took a while until he was able to pedal forward 😉

Take a look at the more recent models and compare features and prices. I always checked the customer reviews on Amazon, too. The features that mattered most to me were the transformability, the sturdiness, and the color blue. I know, the color should be of the least importance 😉 I didn’t care that much about the sun roof, because sun screen and a hat will do their part, but I did want to have some storage room for essentials. When the weather was nice, we put some picnic in the basket in the back, and off we went! What fun it was to overtake “babies” in their strollers when my big guy came racing along! Often, he would call, “Mommy, faster, faster!!” This trike and his Whisper Ride car took it in turns for three summers to explore the towns and nature.