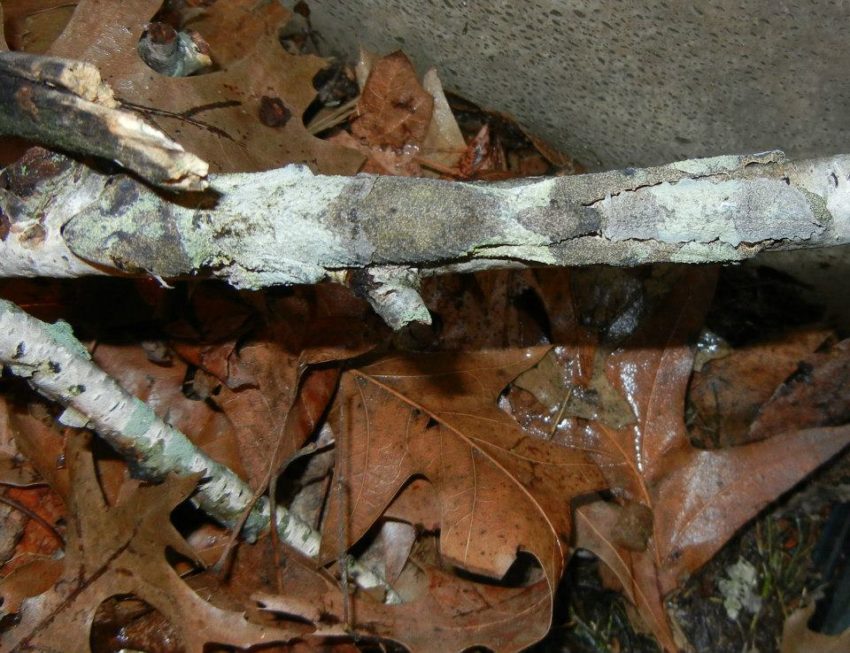 Master of deception, king of hiding – the arboreal mossy leaf-tailed gecko can do mimicry really well and assimilate into its surroundings. This way, it can hide from its predators. They are reported to have lived up to 5 years in captivity; their real life span in the wild is yet unknown. These geckos are much harder to keep than crested geckos or gargoyle geckos, and not recommendable as pets for children. You can’t hold them, tame them, and hand feed them. The only time I ever handled them was when I received them in the mail and moved them gently into their new cages. Even for cleaning purposes, I carefully removed leaves and branches and left them undisturbed.

I only ever had two, a captive-bred (CB) male and a wild-caught (WC) female. The female was darker green with brown, and the male was high white. Alas, when wild caught geckos are imported, they are sometimes loaded with parasites, and my female didn’t live long. They were supposed to be a breeding pair, but they never got out of their separate, 20-gallon and 40-gallon quarantine tanks. The male lived by himself for much longer.

Their genus is Uroplatus, and their species U. sikorae. Originally, they stem from Madagascar, a large island located off the southeast coast of Africa, where they live in humid forests in the east and northeast. Loss of habitat through humans or forest fires threatens their existence, as does illegal pet trade. Their natural habitat consists of lichen-covered tree trunks that are three to six feet off the ground. Therefore, when you hold them in captivity, remember that they like to climb and are not ground-dwellers like leopard geckos. Account for a slightly higher tank, with plenty of branches, foliage, and hiding places, where they will sleep motionless and hidden during the daylight. They are night active animals that can see very well in the dark (even colors!) with their large, yellow eyes with an elliptical pupil. They allegedly can see about 350x better than humans. They don’t have eyelids, so they lick their eyeballs with their tongue to make them nice moist and clean.

Like all leaf-tailed geckos, they got their name from the shape of their tail, which looks like a leaf. However, the mossy leaf-tailed gecko has “dermal flaps,” which is flaps of skin ringing its whole body to make it look like bark. There is an interesting food fact: In the wild, females eat snails to replenish the calcium lost through egg formation, but males don’t eat snails. They both live on insects like crickets and moths. In captivity, they both eat gut-loaded (i.e., well fed) live crickets, earth worms, meal worms, and wax worms that should be dusted with calcium prior to being released in their cage. You need at least a 20-gallon tank per animal. House males separately, as they can become territorial. The day temperature should be between 78-85 degrees F, and a cooler temperature at night, ranging from 72 to 80 degrees F. Mossy leaf-tailed geckos will need full spectrum light 12-14 hours per day. Make sure they have a basking area with access to a cooler zone, as well as branches for climbing. Don’t forget to spray their cages daily, because they need moisture to be able to shed their skin. I filled their glass cages with dried leaves, birch branches, and soil. One has to be careful that no mold arises due to the frequent misting. Therefore, keep the cage well ventilated. When bred, the females can lay 2-4 eggs every 30 days, and they take about 90 days to hatch.

In the picture below, you can see – or not see – the male mossy hiding:

Can you spot Ms. Camouflage down here?

Their eyes always betray them, because the rest of their bodies could easily be taken for parts of the branch they’re sitting on. Here, she is by herself:

They can fan out their beard and the fringes along their body and melt into their environment. Here is the male (it looks like he’s crying, but it’s just a tear drop caused by misting). Sometimes, they hang out face down from branches, sleeping:

Let’s look at their physique more in detail. Below, you can see the suction cups on their little feet:

They can climb glass really well, because the friction on the lamellae of their toes, which are covered with tiny hairs, makes them adhere to surfaces. The millions of microscopic hairs on their toe pads are called setae. Mankind has actually used research about gecko feet adhesion to create machines climbing buildings, etc. For example, see this article about glue:

We can learn a lot from our animal friends! Below are two articles about robotic climbing inspired by gecko feet:

Have you ever wondered what a mossy leaf tailed gecko looks like from its underside? Here it is:

Here are the fringes (dermal flaps) and the beard, which help the mossy leaf-tailed gecko to melt into bark:

All in all, this was the most interesting gecko species I have ever kept. To be honest, they were too difficult for my expert level, and I did not breed them. Observing them was great, but they were so high maintenance that I would not acquire them again. I think I will stick to crested geckos and leopard geckos for my family in the future.