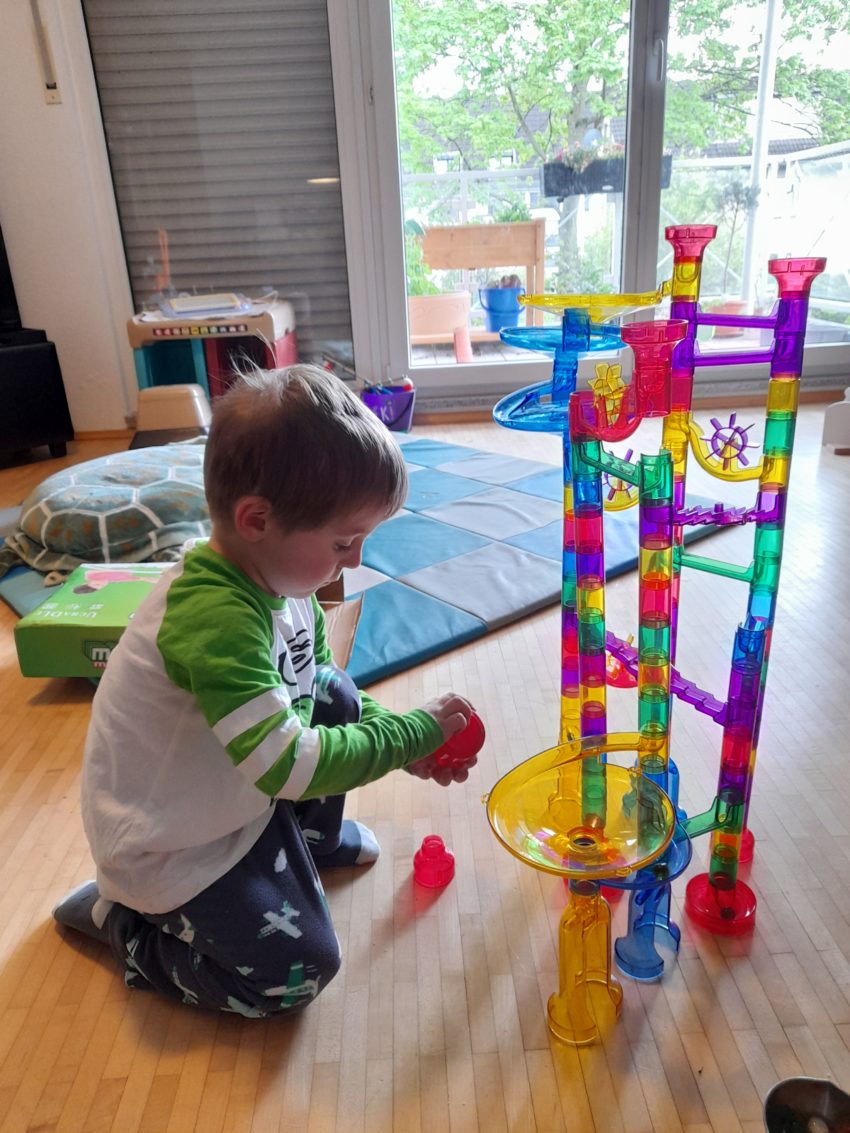 That’s what I’m talking about! Finally, a marble race where a 3-year-old can put together columns, trays, wheels, connections, stairs, and feet without being totally dependent on the adults. What’s more, it’s translucent, colorful, and absolutely beautiful. Lyons Cub still needed a lot of help, but compared to the wooden marble run, this one here gave him more autonomy and joy in the making. There were no toddler tantrums if something fell apart after applying too much pressure; we simply put it together again. Even Lion Granny and Lyoness had great fun with it! It came with its own marbles, but we had already bought a whole net full of them. You cannot have enough, since some will always escape under the furniture. The set has lots of different parts, and it really took some thinking and experimenting before we figured out where a marble would turn up in the end. The marbles are supposed to collect in a small tray in the feet of some of the columns, and not fall out of a hole somewhere that hadn’t been accounted for. The first time round, he played in a concentrated way for TWO HOURS!

Then, he disassembled the whole construct, only to have Lyoness rebuild it with him after dinner, and he poured in whole cups full of marbles, which was very loud and very exciting. We changed the layout several times. We are also going to buy one or two more sets, so we can create an even bigger artifact with more opportunities. It is so much fun to have different openings to start marbles from at the same time, just to see which one arrives first at its goal. Even if they get stuck sometimes, it’s an easy fix, and the towers don’t topple over as easily as was the case with the wooden marble run. We love this one! What a great STEM learning activity.

Lyons Cub has the marble run from Ucradle/Meland, but different companies offer almost the same product with a varying number of pieces and some color and design modifications. Actually, the most important pieces are the feet that collect the falling marbles (the Ucradle/Meland version has only 2 of those), and the Kriogor design has 5 of those, so we got this one, too, in order to extend our artifact. Careful, those two models can’t be mounted together, as the Kriogor one has much smaller pieces, but also more intricate obstacles! (It is more suited for older children who don’t lean on it so heavily, because those smaller components tumble faster.) If you have only two feet that can collect marbles, your building options are limited to two solutions where the marbles can end up, because if you have just a straight tube or one with an ordinary foot, the marbles will fall on your floor and roll anywhere, or they’ll back up into the pipes and you have to take them out by hand (which can make your whole construct tumble). That’s why you need as many feet as you want different routes for the marbles. We ended up with two big sets (Ucradle/Meland) and one with smaller pieces but way cooler obstacles (Kriogor). Check out and compare different versions here: