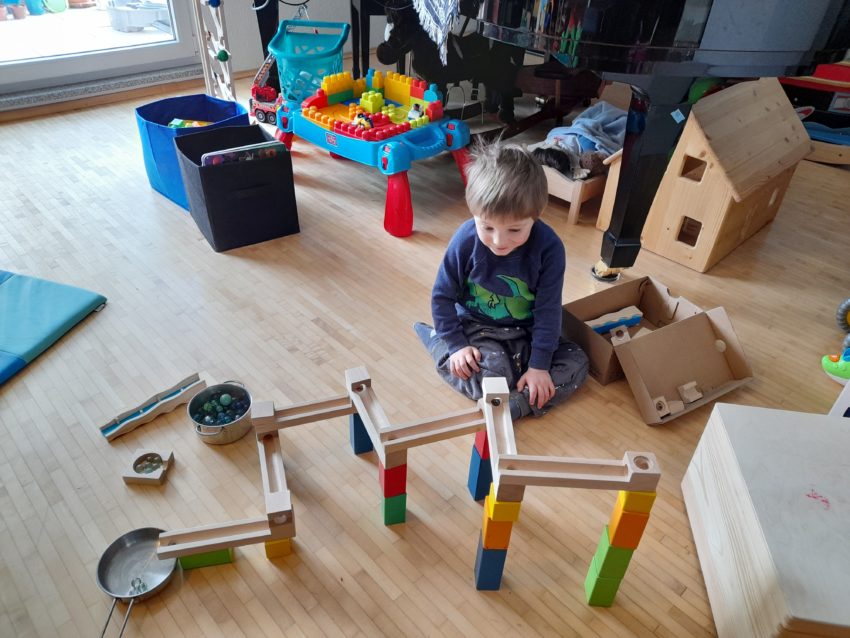 Back in the day, the toys were made of wood and lasted long. This was kind of my ideal when I purchased the wooden marble run from Eichhorn. Granny Lion and Lyoness built it together, while Lyons Cub ran out of steam and tried to intervene, knocking everything over again. If you have an impatient kiddo like I do, this is NOT a toy to set up together! A young child cannot understand the logic behind it and how to put the pieces together. Unless you want it to be a Mensa Quiz like challenge, you’d better set it up secretly and then show it to your kid when it’s all good and done.

This toy is fun once it’s assembled, but mind you, if there is just the slightest misalignment of the holes, the marbles will not go through and your tot will throw a tantrum. Also, if as much as a breath or a finger tip touches the finished artwork, it crumbles. As nice as it is to see the marbles run, it was an exhausting experience for the adults, who had to rebuild and build again, as well as for the preschool kid, who lost his marbles over the collapsing towers 😉

Besides, it was a little bit boring. There were no trays, arches, loops, wheels, bridges, or obstacle races to challenge the imagination where the marble would end up. It was so straight forward. In the next post, I will review a cheap plastic marble race, which was so much more fun and easier for a 3-year-old to assemble! There was a lot of guessing where a marble would come out in the end. It was full of surprises and rebuilding opportunities with different outcomes. My recommendation – unless you’re a builder and rejoice in doing everything yourself, get the plastic version, because the attention span of a toddler or preschool child won’t be long enough to survive the setting up of this wood marble race. It looks great and is of value, but what’s the purpose if the kid cries every time a block falls down – unless you have older children, of course, who want to prove their dexterity! Also, if you have a prodigy or adhere to the Montessori method and would rather try wooden toys that require more thinking, this is for you. I couldn’t decide, so I got both the wooden and the plastic marble races – one for intellectual challenge, and one for fun!

P.S. 1: A year later, Lyons Cub had a whole different approach to dealing with the wooden marble run and was less frustrated when his columns toppled over. He actually got to enjoy building with them! The best thing yet was when he found a huge Haba wooden marble run table at a Mall… Check out what that one was like, with its huge yellow metal bowl and the xylophone staircase…

P.S. 2: Now, Lyons Cub is almost 4, and he is able to build with the wooden marble run kit. He still gets impatient sometimes, but he has understood that the holes have to align properly to make the marbles run through them. For Christmas 2021, he received an extension to his existing kit, namely the great, big, yellow bowl and some stands. He liked the bowl from public wishing wells in the city, into which he used to throw coins for donations. Of course, the donation bowls are much larger, and the coins roll for a long time, while here, they almost directly slide into the hole. But it’s still adding some excitement.

In the following video, you can see the bowl in action. However, it wasn’t able to compete with his coolest plastic toy yet, the Hot Wheels “green slime gorilla.” 😉 Oh well, when the excitement of the howling, blinking plastic toy wears off, he will return to the old values and start building with Oma and Lyoness with his valuable, wooden marble run…