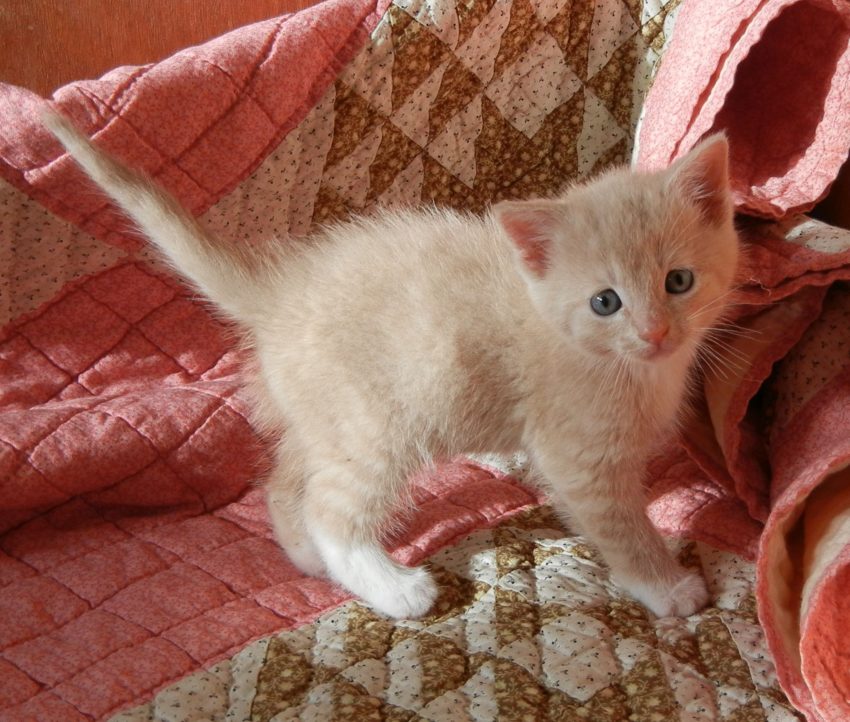 He was supposed to be snake food. This is the story of how I set out to vend geckos as “LZRDGRL” at a Kentucky reptile show and came home not with a new gecko, but with a tiny kitten: Frankie!

We had quite an adventurous trip from Carbondale, IL to Shepherdsville, KY. First, we drove past a huge forest fire near Herrin; it was very windy, so that a small fire on a meadow could quickly spread out. Then, we lost our way despite using GPS to find “South Lakeside Drive.” It was already 10 p.m., Tom couldn’t see very well anymore, rode over several curbsides, and drove aimlessly through the boonies. When the GPS finally announced “you arrived at your destination,” meaning Lakeside Drive, we stood in front of a deserted village church. Kay was mad, and we had to drive all the way back and lost 45 minutes. Then, we finally reached the Best Western Hotel, just to hear that our reservation (which we carried as a print-out on us!) had somehow gotten lost out of their computer, and they were totally booked out. Due to the shows in town, there weren’t any vacancies in the other hotels, either, the receptionist kindly let us know. It was at that moment that I announced we were reptile vendors at the show, pointing at our LZRDGRL t-shirts sporting the grinning face of a Tremper Albino leopard gecko, and that we would talk to the organizer of the reptile show to withdraw all the reservations for vendors from this hotel and to put us up in a different place. The receptionist must have gotten afraid, because all of a sudden, after a quick phone call, the Days Inn across the street DID have a room for us!

It was only $77 a night, and we shared a room, no problem. I had my own queen-sized bed, but there was no elevator, and we were on the second floor, so Kay grumbled because she didn’t want to walk the stairs due to her knee trouble. Moreover, there was no internet service nor cell phone reception, so she had to stand in the rain on the wobbly balcony to make a phone call. She sat at her laptop until 5 a.m. and was not a happy camper. I took a hot shower, crashed for the night, and woke everyone up at 6 a.m. to get ready for breakfast at Dennis. At 8 a.m., we were on the fair ground and set up our table. We were among the first vendors showing up that early.

I sold the most geckos in the first five minutes, because the other vendors were walking around with their little children and snatching up the best animals before the masses were let in at 10 a.m. Luckily, I also found a nice rehome facility for my “problem children”: I had a few Enigmas, who suffered from the Enigma syndrome (wobbly head, missing their food when striking, turning in circles), a hereditary disease, as well as one Tangerine Albino born with metabolic bone disease (MBD), softened bones that made her forearms crippled. Those animals I either keep as pets or give away for free, because you cannot breed them. Many breeders just “cull” such flukes of nature, meaning they feed them to bigger lizards or put them in the fridge to fall into a cold coma, and then in the freezer (but my soft heart kept me from humanely euthanizing them). If you keep animals that hatch with deformities, you will have to make a life-long commitment to hand-feed them and care for them. With as many geckos as I was hatching, I did not have the time for individualized special care, so the ethical decisions were either culling or adopting them out.

Alas, I did not see a single leopard gecko I would have wanted to buy. In my opinion, I had the prettiest ones 😊 Usually, I come home from shows with several new additions. This time, I just walked around to look at other vendors’ tables. I saw a mysterious yellow fabric bag that was wandering around on a table and starting to climb up a metal stand – the snake inside of it was making a brief excursion, but didn’t get very far, alas. It was allowed to spend the rest of the show around the neck of her Mama, who was sitting exactly next to Kay’s chair! I saw a giant frog with lots of little babies of normal frog size and wondered who would buy those, knowing they would grow into a melon-sized monster. I admired many snakes, tarantulas, salamander, axolotls, and – a 10-gallon fish tank full of snake food: four cute, little kittens!

Three were gray, but below them was a tiny tan one. They were only 6.5 weeks old. The snake vendor was giving them away for free, saying that if one remained, it would become snake food at the end of the show. Oh no!!! I had to take one, the tan kitten.

Then, I walked around looking for people to take the other kittens. A family with three young daughters picked up a gray one, and the others also made it into good hands before the show was over. I was relieved. Kay committed to keeping the kitten under her shirt during the rest of the show, so he would be warm and comfy. She loves cats! I think that made up for the offline hotel room and the snake dangling next to her.

There are actually people on Craigslist who announce they want to give kittens and puppies “a good home,” and when they get them for free or for cheap, they feed them to their boas in the basement…. that should be illegal. It probably is. And those people have their reasoning: “it goes back to nature; that’s the circle of life” – other people drown their unwanted litters, and at least these get fed to a valuable snake… What can one say against that? Maybe feed them with frozen rats that got “humanely euthanized”? Some animals are meat eaters; it happens in nature, too; but if you raise your own snakes, you can’t be faint of heart if you want to feed live food. One reason in favor of live versus frozen food is that it keeps the animals active, because they need to go hunting instead of just opening their mouths and be served their dinner.

The show was over at 4 p.m., and we had started packing up our table and banners about 15 minutes prior. I had met an old acquaintance at the show: Brian, who had had his stand opposite of mine for two times at the Indianapolis, Indiana show in the summer of 2010. He sells hydroton clay balls, which I used to put into my cages as substrate. I always had a sample terrarium on my table, layered with hydroton, for my customers to see, which made them walk over to Brian’s stand after buying a gecko from me, to acquire some hydroton. Today, I had put paper towels into my sample cage, because I could feed the geckos better on it without the mealworms and wax worms disappearing into the hydroton. Brian came over with a reproachful grin: “I’m not making a good profit today, Chrissy! You don’t have hydroton in your cage.” He presented me with a food bowl for my new little addition, the kitty. It came from his big box labeled, “everything for $1.” This was Frankie’s first possession.

Tom drove quite fast, and we won an hour due to the time difference between Kentucky and Illinois, so we arrived in Carbondale around 8 p.m. I introduced Frankie to the existing cats and got him set up in his new home.

I was so happy I had sold 18 gecko babies at the show, but when I returned home, there were already 13 new hatchlings sitting in the incubator, hissing and waiting for me! Frankie, in the meantime, made himself quite at home. He chased the tails of my older cats from the Humane shelter, Lottie and Leo, and he played with the tamer one of my Labrador Retrievers, Honey.

Frankie had a soft quilt to sleep on, as well as a cat bed from Petco. He ate Fancy Feast (his favorite was Gravy Lovers, and he liked the chunks more than the shredded meat).

It didn’t take long, and this tiny mighty kitten brought me his first mouse! (It was unharmed, but wet because I had to hold Frankie’s head under the faucet for a second to convince him to release his trophy, which I let loose in the back yard.) This cat caught about a dozen mice during the ten years I called him my own.

He soon would grow and become a lean, long cat. He never got fat, although he loved his food, because he was so active. He was an indoors cat only. He really took to my husband, David, in whose house we lived from 2014 on. He used to sit on his lap and sleep while David and I watched TV in the evenings.

When my husband passed, Frankie got very ill. He suffered from pancreatitis and threw up on the floor a lot. He was actually gone for two days, and I wasn’t able to find him. I was afraid he had either gotten out of the door and run away, or passed somewhere in the house. But I didn’t smell any cadaver, so he must still have been alive. I searched everywhere, until I found him inside my husband’s arm chair. There was a hollow place under the seat he had gotten into. I got him out and took him to the vet, and with the help of medicine, he recovered slowly.

When we moved to Clarksville, Tennessee in 2017, Frankie found a new friend: Felix, a stray whom I caught and had neutered, and who was allowed to move in because he was so cold outside in the snow. He became a frequent guest, although he mostly slept outside when the weather was nice.

Frankie also loved my son, Leander. At first, he was bigger than Leander, but soon, that would turn around!

Frankie really liked to watch TV, especially when there was a show about cats. Sometimes, he would beat the screen with his paws!

He loved to sleep in the shopping net below my son’s stroller. Too bad that my son liked to climb into it, too!

In 2020, when we fled the pandemic and moved to Europe, both Frankie and Felix went to good homes of friends. Frankie is still alive and going strong. He is 11 years old now, in 2021. I hope to see him again after the pandemic, when international travels for leisure are possible again. And I hope he has a long, happy life.

P.S.: It is 2022 now, and Russia has invaded Ukraine. If you want to support an artist in Ukraine, go to JoyLandCrochet, Svitlana’s Etsy store; she made me a beautiful, custom Frankie kitten to remember my boy by, and she can crochet you a memory piece of your beloved pet, too:

He has movable legs! 😉 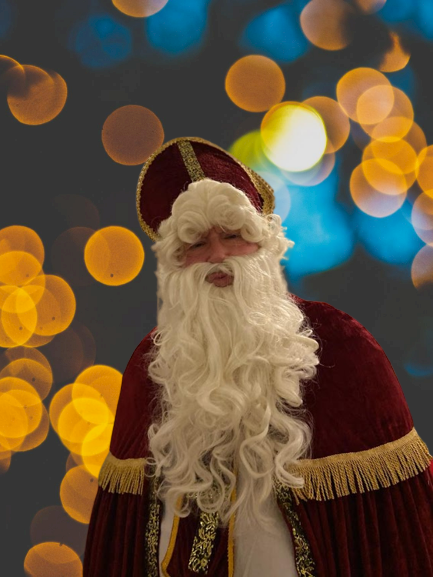 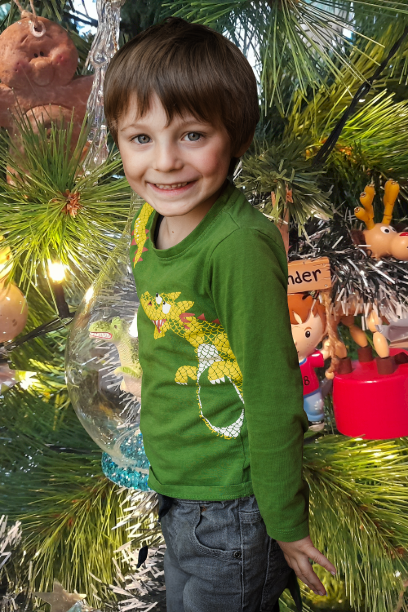