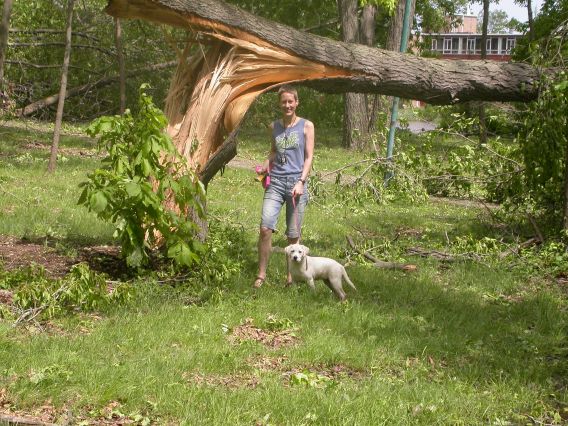 It was May 8th, 2009, around 11 a.m. I sat at the computer in my office in the English department in Faner Hall of Southern Illinois University Carbondale, from time to time glancing out of the window at the bending trees and the pouring rain. It was finals week, the final exams and essays had been written and turned in, and I was grading. School was over, most of the students had already left, only the professors were busy putting the final grades into D2L. Suddenly, the power went out and my computer went black. Since there was nothing more I could do in the office (the final essays were all online submissions, so I didn’t have any paper copies to grade), I thought I’d hurry home before the weather got any worse. I got into my almost 20-year-old Chevy S10 pickup truck and started driving home, but there were so many trees on the road that I couldn’t get through to Skyline Drive. I left my car in a parking space at S Oakland Ave and walked the rest through now blaring tornado sirens and storming rain, the water reaching over my ankles.

When I got to my street, my huge poplar tree lay felled in front of my house. Luckily, it hadn’t fallen onto my roof, but it split my concrete driveway in half and was lying across the road. I just thought, thank goodness, my tenant Jielei was in China for her summer break and had lent her car to a friend during her absence; otherwise, her car would have been smashed, since it used to stand in the very spot where now my tree lay.

I went into the backyard to look at the outside damage. My roof had a small hole and several shingles down, and the plastic siding had some holes and scratches from fallen branches. I went inside to check on my 5-months-old Labrador Retriever puppy, Sally, and made sure she wasn’t afraid. She wouldn’t be able to play outside anymore, because four of my smaller trees had fallen and knocked down the newly-built chain-link fence around my back yard.

Then, I checked my incubators. I was a leopard gecko breeder, LZRDGRL, vending at reptile shows. Since the power was out (and would be out for an entire week), I feared that the leopard gecko eggs I had been incubating would get too cold, so I put a few packages of hand warmers into the incubators. They made it a little warmer than I wanted, but better than having gecko babies die in their eggs. There were some eggs that I incubated at 91 degrees F to be males, and in the other incubator, at 82 degrees F to become females. Fluctuations in incubation temperature might cause deformities, premature hatching, or death. Since it was warmer now due to the heat pack, incubation time was shortened, and I had a few geckos hatch early, alive and well, like this Bell Albino:

After having assessed my own damage, I went down the street to my friend’s house to help with hers. Her house was hit much harder than mine. Two high walnut trees from the back yard had crashed through her windows, right next to her grand piano. Some of her eight cats had wandered outside on the trunks and stepped into the shredded glas from the windows, leaving little bloody kitty prints on the kitchen laminate floor. A nice neighbor who owned a chain saw cut the tree into pieces for her. It would take three months to get the windows repaired, since her house wasn’t on the priority list, which was reserved for the people with the most damage. We took trash bags and scotch tape to install a preliminary window, which even survived the June 8th follow-up storm (which wasn’t as bad).

Sally had a heck of a time. The day after the storm, I took a walk around town with her, since the back yard was of no use, and we came by lots of damaged houses. Torn-off aluminum roofs hung on cables like sauerkraut, power lines and transformers lay on the streets, cars with shattered windows stood around campus lake, and people were on the road everywhere, helping one another. The buzzing of chain saws was in the air, and utility workers and support crews from other states had arrived to erect new, wooden electricity poles and hang up cables. Sally greeted the workers, picked up some gloves she had found, and enjoyed the muddy puddles.

We still picked up my host parents’ Schnauzers, Tonto and Lilly, to go walking through devastated Carbondale, since dogs have to go out, after all, come rain, come shine, come storm! We just needed to be careful not to step onto downed power lines, and not to be hit by falling branches. We heard that only one person had lost his life in that storm, shortly after it was all over, because he was hit by a tree that fell afterwards. It would take weeks to clean up the city and remove the trees and debris, and for months, one would see blue tarps over roofs that were not on the priority list to get fixed yet. I felt sorry for people without insurance. My insurance paid me about $12,000 to have my roof and siding fixed. They did not pay for the yard fence and the drive-way, since those did not belong to the house. Neither did they cover the removal of the huge poplar tree and the four smaller trees. I was a grad student at that time and had to afford it all out of pocket. Thus, I left the cracked drive-way as it was, but I got rid of the fallen trees and ordered a stump grinder (as soon as one was available; those people must have made a big profit during those months).

All my damage was NOTHING compared to what David, my later husband, experienced. I did not know him yet in 2009; I first saw him in concert in Carmen in 2010, and we met in the School of Music at SIUC for playing my compositions in November 2011. He told me that he was at home during the storm, hiding in the bathtub, which is considered the safest place in a house. Suddenly, he heard a huge thump, and an enormous tree crashed right through his house, taking off the roof, splitting the house in parts, destroying the car port and his car completely, and finally landing on his grand piano. He escaped unscathed. He had his grand piano, which also suffered water damage, restored months later. The insurance paid him $60,000. For an entire year, David had to move into a student dorm until his house was rebuilt.